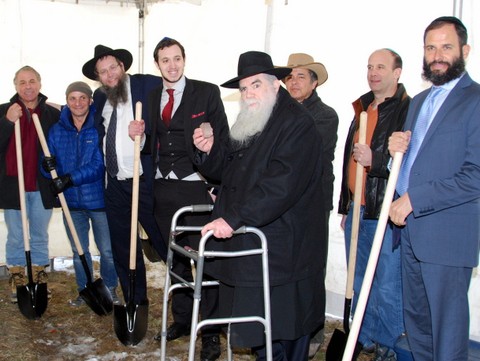 Rabbi Yisroel Popack holds a brick from the "770" building for use as a cornerstone of learning here in Boulder.

Frigid outside temperatures didn’t deter more than 100 people from celebrating with Chabad Lubavitch of Boulder as they broke ground on their new Jewish Learning Center this afternoon.  A heated tent, hot food and drink and the warmth of community sustained the crowd as several speakers invoked memories of the Great Boulder Flood of 2013 as the flashpoint for making the long-time dream of a new Learning Center at 2810 Jay Road a reality for Chabad of Boulder.

After the speeches, the groundbreaking commenced, as Rabbi Pesach Scheiner led a group of supporters and guests in attacking a small area of thawed ground with shovels.  Rabbi Yisroel Popack was given the honor of placing a brick from the legendary “770” building, the world headquarters of the Chabad Lubavitch movement at 770 East Parkway, Crown Heights, into the hole dug by the shovelers.

The new Jewish Learning Center is expected to open on September 9, 2014, the one-year anniversary of the Great Boulder Flood as proof that from disaster, a strong community can rise again.  More information about the project is in the BJN’s earlier story about the groundbreaking.

I've been writing things since grammar school, and served as a writer, photographer and/or an editor on my junior high and high school newspapers; the Daily Trojan at USC (where I earned my journalism degree); the student newspaper at the Anderson School at UCLA (where I earned my MBA); and written and edited countless business documents and presentations in the ensuing twenty years. I've been involved Jewishly since my bris and in Boulder since 1995. I'm married to my Executive Director Cheryl, and we have two children, Lauren and Ethan.
Previous What Are the Jewish Views of the Afterlife?
Next Camp Ramah Scholarships for Day School Students Now Available

Letter to the Editor 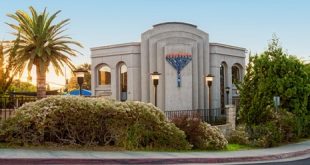