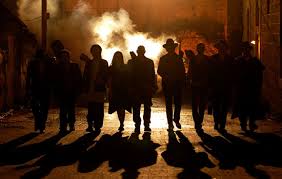 "The Ballad of the Weeping Spring"

The second annual Boulder Jewish Film Festival Sponsored by the Millstone Evans Group of Raymond James closed out tonight with a fabulous film, “The Ballad of the Weeping Spring,” a musical homage to spaghetti westerns and samarai films alike as only an Israeli director can do it.  But the real star of the movie, and the evening, was the Mizrahi music soundtrack penned by Mark Eliyahu, who also plays a role in the film.  The Denver-based Middle Eastern band, Zuruna, provided a perfectly matched musical soundtrack for the closing party, which featured a buffet of Middle Eastern delicacies including falafel, babaganoush with pita, stuffed grape leaves, dates, olives, pistachios and baklava.

This second BJFF proved more successful than the first festival last year, and we are left looking forward to the third annual with much anticipation.

More photos from the party:

I've been writing things since grammar school, and served as a writer, photographer and/or an editor on my junior high and high school newspapers; the Daily Trojan at USC (where I earned my journalism degree); the student newspaper at the Anderson School at UCLA (where I earned my MBA); and written and edited countless business documents and presentations in the ensuing twenty years. I've been involved Jewishly since my bris and in Boulder since 1995. I'm married to my Executive Director Cheryl, and we have two children, Lauren and Ethan.
Previous “No Kidding!” Jewish Goat Co-op Goes High Tech
Next Hamentashen Bake-In — Let’s Celebrate Purim