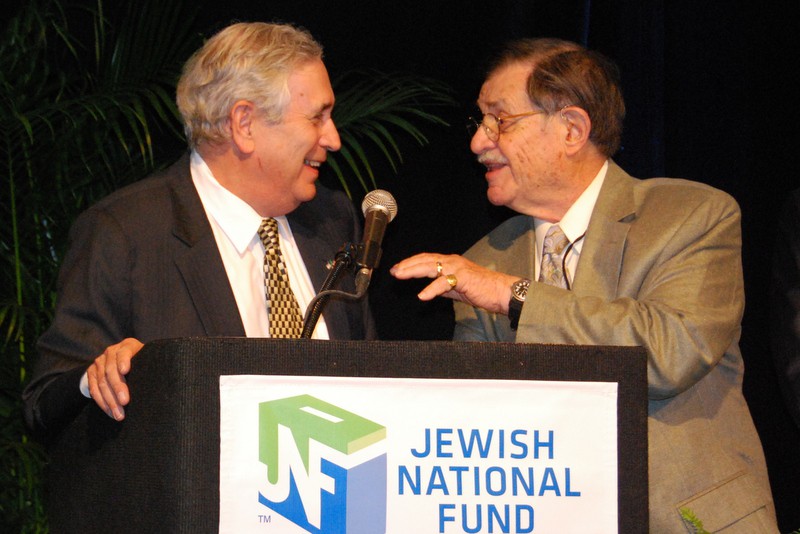 The Jewish National Fund honored Gene Kay and Stanley Kamlet on the last day of the 2013 JNF National Conference Monday morning for their many years of service to the Mountain States Region.  Kay recently completed 13 years as Region President, and Kamlet has served as the Regional Director for 16 years, “after supposedly retiring, ” said Kamlet.

The pair starred in a video about their work for JNF shown to the conference, and were given plaques by JNF President Jeffrey Levine, who said “I’m not sure if they are Abbot and Costello or the Odd Couple,” but together they have built the Mountain States Region into something special.

Kay is being succeeded by Ron Werner of HW Home as Mountain States President, and Kamlet is being “augmented” by Boaz Meir as Regional Director.  Both Kay and Kamlet swore they would be in their offices again Tuesday morning — Kamlet at JNF in downtown Denver and Kay at his usual table at Zaidy’s — as Mountain States Board Chair.

Boulder Jewish News congratulates both men and thanks them for their on-going service to JNF and the Denver-Boulder Jewish community.

I've been writing things since grammar school, and served as a writer, photographer and/or an editor on my junior high and high school newspapers; the Daily Trojan at USC (where I earned my journalism degree); the student newspaper at the Anderson School at UCLA (where I earned my MBA); and written and edited countless business documents and presentations in the ensuing twenty years. I've been involved Jewishly since my bris and in Boulder since 1995. I'm married to my Executive Director Cheryl, and we have two children, Lauren and Ethan.
Previous Saliman Named Grinspoon-Steinhardt Winner
Next The Neuroscience of Death and the Journey of the Soul