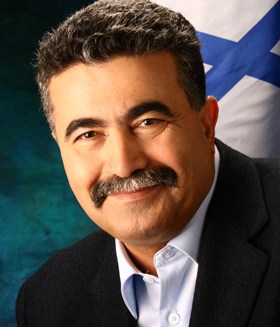 We are honored to have Amir Peretz join our National Conference. His role as Minister of Environmental Protection aligns closely with JNF’s vision in building a sustainable Israel for the next generation and we are looking forward to his presentation on this topic. Peretz has had an illustrious career that includes serving as former mayor of Sderot, a town whose people hold much meaning to our organization.”

Amir Peretz currently serves in the 19th Knesset as Minister of Environmental Protection. As a member of the Knesset since 1988, he has served on a number of committees, including Foreign Affairs and Defense, Labor and Welfare, Constitution, Law and Justice, and the House Committees, as well as the Committees on the Status of Women and Foreign Workers. Peretz grew up in the town of Sderot located in the Negev where at the age of 30 he won his first election and became the mayor of Sderot. In 1995 he was chosen Chairman of the Histadrut Labor Federation and was voted in by a large majority once again, three years later. He became a leader for the working class, leading many labor struggles. Peretz established the Am Ehad (“One Nation”) party in preparation for elections for the 15th Knesset in 1999. In 2004, Am Ehad was reunified with Labor, and in November 2005 Peretz was elected Chairman of the Labor Party.

Held at the Grand Hyatt Denver from October 25-28, the JNF National Conference will highlight some of the world’s most influential people and will include sessions featuring Israel’s top leaders, JNF’s vital work that is transforming the lives of Israel’s residents, and Israel’s contributions that are making the world a better place. More than 500 community leaders from around the country will hear from experts during the weekend event described as “the conference of a lifetime.”

Participants will also hear from such notables as Governor John Hickenlooper; Gordon Zacks, Businessman, Author and Former Presidential Advisor; Naty Barak, Chief Sustainability Officer of Netafim; Ken Salazar, Former Secretary of the U.S. Department of the Interior and U.S. Senator; David Lehrer, Director of The Arava Institute for Environmental Studies; and many more. The Sunday evening gala will feature entertainment from Hagit Yaso, Israeli Idol Winner and International Star, along with remarks by JNF Chairman of the Board, Ronald S. Lauder.

Online registration for the 2013 National Conference is now closed. For information or to register, please contact Hindy Komin at hkomin@jnf.org or 212.879.9305 x295.