Rabbi Simcha Weinstein will be delivering a talk on Sunday morning in Westminster about comic book super heroes and their Jewish roots and his journey from a British comic to an American rabbi. 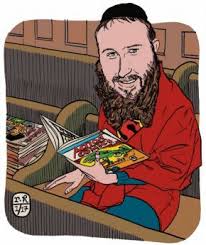 On Sunday morning at 10:00 am – 12: 00 pm Rabbi Simcha Weinstein will be delivering a talk in Westminster about comic book super heroes and their Jewish roots and his journey from a British comic to an American rabbi.

The presentation takes place at Chabad of NW Metro Denver at 4505 W 112th Ave in Westminster. A brunch will be served. There is a $15 cover fee. Reservations at www.COJewish.com

What is the connection between comic book super heroes and biblical characters?

The early creators of super heroes were predominately Jewish and widely acknowledged that their characters were based biblical architects.

How does your comic book background help you as a rabbi?

Having attended Manchester Metropolitan University, where I earned a B.A. in film history I am able to minister and relate more personally to the students at the New York art school, Pratt Institute where I serve as the campus rabbi and Chair of its Religious Affairs Committee.

Who is your favorite comic book character?

Spiderman! Growing up in the UK I could really relate to his guilt and very nebbish alter ego.

If you had one super power, what would it be?

The power to go back in time to get a good night sleep! No seriously, we all are endowed with super power, however it’s up to us tap into it and really make a difference to the world around us. See you on Sunday!

Simcha is also a popular television and radio guest, having appeared on CNN Showbiz Tonight, NPR and other programs. He has also been profiled in ma ny leading publications, including The New York Times, The Miami Herald, The Seattle Times and The London Guardian.

Simcha holds a bachelors degree in Film History from the Manchester Metropolitan University, England. Following graduation, he became an associate for the British Film Commission and coordinated the production of hundreds of feature films throughout the United Kingdom. They say that “when man makes plans, God laughs.” As Simcha began to rediscover his spiritual roots, his path veered from show business to the yeshiva, and he eventually became a rabbi.

Today he chairs the Religious Affairs Committee at the renowned New York art school, Pratt Institute. Simcha also serves as rabbi to Long Island College Hospital and is the founder of the downtown Brooklyn Jewish Student Foundation, an educational and cultural center that strives to ignite Jewish pride and values through innovative educational and social experiences in an open environment. Simcha’s unique background and life experiences have led him to reconsider the popular culture of his youth through the lens of his commitment to Jewish ethics and spirituality. This one-of-a-kind perspective, along with his wit, makes him an entertaining and much sought-after public speaker.

Benjy Brackman is the Rabbi/Executive Director of Chabad of NW Metro Denver in Westminster, Colorado.
Previous What’s Next in Your Job Search or Business Growth?
Next Week in Review: March 8th, 2013