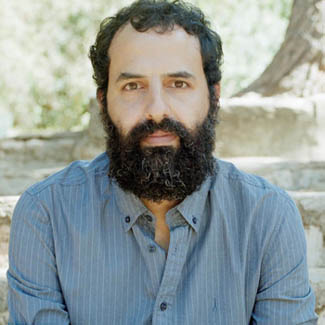 “Between Hebrew and Arabic in Israeli Literature” with Almog Behar

The Program in Jewish Studies, Hillel and the Certificate in Middle Eastern and Islamic Studies at the University of Colorado Boulder welcome Jewish Israeli Poet, Author and Activist, Almog Behar to CU’s Aspen Room in the University Memorial Center on Thursday, November 21 at 7:00 pm for an evening discussing his work, his activism, and readings of his most recent poetry.

Almog Behar is an Israeli Mizrahi (Jew of Arab descent), award winning writer and poet. He is also an activist involved in the solidarity movement against the eviction of Palestinian families from the East Jerusalem neighborhood of Sheikh Jarrah. Behar is also actively engaged in a vibrant community of Jewish and Palestinian Israeli writers—who write in both Hebrew and Arabic—and has participated in the organization of bilingual poetry readings and publications.  His own fiction and poetry explore the connections between Hebrew and Arabic, insist on the importance of Arabic culture in contemporary Israel and highlight the historic and tradition-based connections between Judaism and Islam and Jewish and Muslim communities throughout the Middle East.

Arabic is an official language of the State of Israel, a country usually known for having resurrected Hebrew, and has been since the days of the British Mandate in pre-state Palestine. While Israel maintained Arabic’s official status with the intention of protecting minority rights in a Hebrew-dominated culture, it also marked Arabic as the language of the Palestinian minority, artificially dividing the citizens of Israel linguistically and culturally. As an Arabic-speaking Jew, Behar forces us to ask: what about Jews who speak Arabic and embrace Arab culture as their own?

Behar works to break down those cultural divisions through his writing and his activism.  His poetry speaks about issues concerning borders and crossing borders; memory and forgetfulness; home and exile; art, social and political protests; and tradition versus traditions.

Join us for an evening with Almog Behar that will include a conversation with Dr. David Shneer, Director of the Program in Jewish Studies and Singer Chair in Jewish History, about his work as a poet, author and activist as well as readings from his recent work. Complete details can be found at jewishstudies.colorado.edu or by calling 303.492.7143.

Dr. Liora Halperin, Assistant Professor in History and Jewish Studies, is also coordinating a special colloquium on Wednesday, November 20 at 5:00 pm titled “Between Jewish Liturgy, Arab Music and Israeli Hebrew.”  Focusing on Behar’s most recent work, this event is will be an exploration of the connections between Hebrew and Arabic in literature, the importance of Arabic culture in contemporary Israel and highlight the historic and traditional-based connections between Judaism and Islam and Jewish and Muslim communities throughout the Middle East. The event is open to the public but RSVPs are required.  Please email Meghan.Zibby@colorado.edu or call 303.492.7143.  Location will be provided when RSVP is confirmed.  Behar will also be a guest lecture in our Israeli Literature class, taught by Dr. Zilla Goodman, Senior Instructor and Director of the Hebrew Language and Literature Program and Director of the Undergraduate Studies for the Program in Jewish Studies.

Almog Behar’s visit has been made possible by generous donors to Hillel, the Certificate in Middle East and Islamic Studies and the Program in Jewish Studies at the University of Colorado Boulder. Visit jewishstudies.colorado.edu for more information.

Assistant Director of the Program in Jewish Studies at the University of Colorado at Boulder
Previous 2nd Annual Chanukah in Lafayette
Next Week in Review: November 15th, 2013