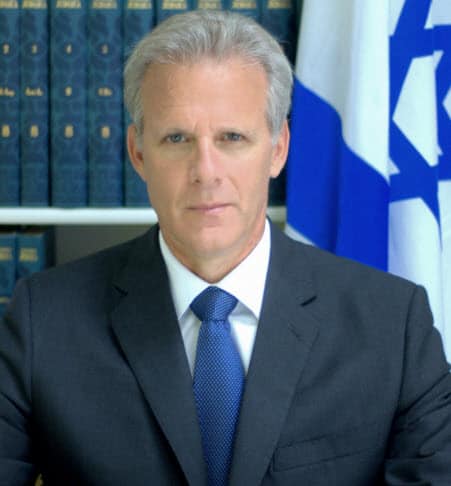 This is a critically important time for Ambassador Oren to speak to our community, as the world is watching the situation in Syria and the Middle East very closely,” said Doug Seserman, JEWISHcolorado’s president and CEO. “Ambassador Oren’s perspective on how Israel and the region will be affected, the role of the U.S., as well as other relevant issues facing the U.S. and Israel today are invaluable.”

Oren, who will concluded his term this fall, was appointed ambassador in 2009. He has been instrumental in securing U.S. support for Israel’s defense and upholding Israel’s right to security and peace. The Forward named Oren one of the five most influential Jews in America and the Jerusalem Post listed him as one of the ten most influential Jews worldwide. Born in the United States and educated at Princeton and Columbia, Oren has been a visiting professor at Harvard, Yale, and Georgetown, and was a Distinguished Fellow at the Shalem Center in Jerusalem.

We are incredibly fortunate to have Ambassador Oren keynote the Men’s Event this year,” said Larry Mizel. “Throughout his impressive tenure as ambassador, we’ve seen his unwavering commitment to US-Israel relationship. Ambassador Oren’s remarks promise to be thought-provoking, timely and significant.”

“As JEWISHcolorado takes on a new name and direction, it’s the perfect time for our community to rally together to raise much needed funds through grant making, programs and strategic alliances,” said Amy Toltz-Miler, JEWISHclorado’s Development Chair. “The Men’s Event is one of our premier fundraising events, and we are excited about this year’s potential for impacting Jews locally, in Israel and around the world.”

Founded in 1946, JEWISHcolorado, formerly known as Allied Jewish Federation of Colorado, is a proud member of the Jewish Federations of North America, which is among the top ten charities in North America. JEWISHcolorado raises and allocates funds to a wide variety of partner agencies and organizations in Colorado, Israel and in more than 60 countries worldwide.  Last year, JEWISHcolorado’s annual campaign raised $10.4 million and the endowment arm houses more than $50 million in long term assets for individuals, agencies and synagogues in the community.  JEWISHcolorado’s mission: We secure, steward, and share philanthropic and human resources in support of vibrant Jewish life in Colorado, Israel, and around the world.  We also mobilize the Jewish community in times of need.

For more information, visit us at www.JEWISHcolorado.org

Talia Haykin is the Marketing Senior Manager for Allied Jewish Federation of Colorado. Additionally, she blogs at TaliaSheWrote.com and KosherSheEats.com. See her ROI profile at www.roicommunity.org/users/talia-davis
Previous Burial of Sacred Flood-Damaged Texts Arranged
Next Put the “Giving” Back Into Turkey Day

The Boulder JCC has begun offering in-person meditation on Thursday mornings from 9 to 9:30 a.m. In these 30 minute sessions there is a short Jewish mindfulness teaching, 18 minutes of silence, several minutes for voluntary sharing, and the reciting of a healing prayer, and Kaddish.