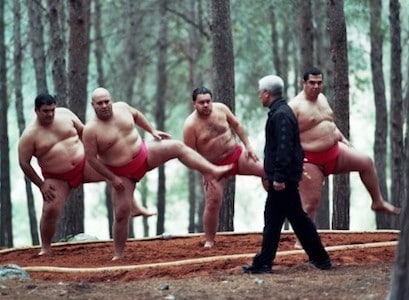 Sushi, Sumo and Cinema on Sunday Menorah serves up a Japanese dinner and a brand new hit comedy about Israeli sumo wrestlers on Sunday, May 6, at Har HaShem’s South Building.

Hilarious and heart-warming, “A Matter of Size” is feature film about four overweight guys who learn to love themselves through the Japanese sport of sumo wrestling.

When Herzl (Itzik Cohen) starts working in a Japanese restaurant, he discovers the world of Sumo, where large people such as himself are honored and appreciated. Through the restaurant owner, a former Japanese Sumo coach, Herzl and his friends fall in love with a sport involving “two fatsos in diapers and girly hairdos. A “coming out” story with a twist, the comedy is utterly irresistible! The evening, co-sponsored by the Har HaShem Israel Partnership Committee, includes a catered Japanese dinner and film at 6:00 pm for $25 in advance. Tickets are $10 for the 7:00 pm film only.

Kathryn has spent her professional life writing about, teaching, and presenting the arts. Founding Director of the Boulder Jewish Film Festival, Kathryn was Director of Menorah and ACE at the Boulder JCC from 2003 through August, 2019. The former film and theater critic for the Boulder Daily Camera, Kathryn is the author of "The Fifty Greatest Jewish Movies" and "The Fifty Funniest Films of All Time." kathryn.bernheimer@gmail.com
Previous CU Jewish Studies Interns: Evan Taksar
Next Who Wouldn’t Want to be a (JFS) Friendly Visitor?