No Way Out – On Stage Sunday

Mizel Museum and Stories on Stage are collaborating to present No Way Out by Susan Shear, a professionally staged reading of more than 50 letters that tell a complex and moving story of a family trapped in Germany during the Holocaust, Sunday, April 1, 2:00 p.m. at Su Teatro at The Denver Civic Theater, 721 Santa Fe Drive, Denver. The performance will be followed by a reception to honor four Denver area child survivors of the Holocaust, and a talkback with the actors.

At once both ordinary and extraordinary, No Way Out documents a family’s struggle to survive during the Holocaust and gives insight into the stories of thousands of Jews who attempted to flee Germany during the Nazi regime. No Way Out is based on the true story of Susan Shear’s family members in their own words taken from a collection of over 500 letters they wrote while living in Nazi Germany. Intimate, moving and riveting, No Way Outis a poignant true story of family love and devotion, humanity and dignity that the Nazis could not destroy.

Because it is such an intimate story and because Susan Shear is such a masterful storyteller, No Way Out gives us an incredibly valuable tool to teach about conscience formation and to learn about the tragic consequences of remaining indifferent to evil,” said Dr. Dan Clayton, Regis University History Professor.

Attendees are invited to the post-performance reception with refreshments and the opportunity to meet survivors Paula Burger, Eric Cahn, Rosalyn Kirkel and Ossie Sladek.

About Stories on Stage

Stories on Stage creates programs from the belief that literature is a rich source of powerful stories and actors enhance the impact of literature on people’s lives. We present literature from writers of diverse cultural backgrounds, read by professional actors to an audience that is as broad-based as our community. For more information visit www.storiesonstage.orgor call 303-494-0523.

About the Mizel Museum

The Mizel Museum is a portal to the contemporary Jewish experience. Exhibits, events and educational programs inspire people of all ages and backgrounds to celebrate diversity. Fine art, film, literature, drama, music, sculpture and technology offer interactive experiences that promote community and multicultural understanding. The Museum’s first permanent exhibit, 4,000 Road Trip: Gathering Sparks, is a dynamic journey through art, artifacts and digital media that narrates and illuminates Jewish history and culture. The Museum is located at 400 S. Kearney Street, Denver, CO 80224. For information visitmizelmuseum.org or call (303) 394-9993.

They call me "NewsHound IV," because I'm a clever Finnegan, sniffing out stories all over the Boulder area. I love Jewish holidays because the food is GREAT, especially the brisket. Well all the food. I was a rescue pup and glad to be on the scent!
Previous Jewish Israeli Poet Almog Behar at CU April 2
Next Week in Review: March 30th, 2012 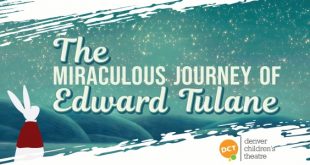