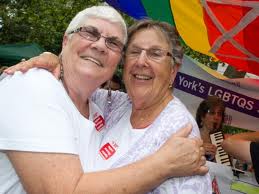 Ruthie and Connie: Every Room in the House

LGBT Film Series Kicks Off with “Ruthie and Connie”

Join CU’s Departments of History, Ethnic Studies, Women and Gender Studies as well as the Program in Jewish Studies, the LGBT Studies Program, and the LGBT Center for a fall film series that examines contemporary LGBT issues in America.

Kick off LGBT History month with the first film in the series, “Ruthie and Connie: Every Room in the House“ on Wednesday, October 3, 2012 at 5:00 pm on the CU Boulder Campus in the Atlas Building, Room 100. “Ruthie and Connie” is a heart-warming film about two Jewish lesbians who were very politically active, well before it was politically correct to do so.  The film engages domestic, political, cultural and even religious issues as they pursue first domestic partnership in New York and then years later, the fight to get married.

David Shneer, Louis P. Singer Chair in Jewish History, Director of CU’s Program in Jewish Studies and Professor of History will lead a post-screening discussion. Shneer holds a PhD from the University of California-Berkeley and has been called a “taboo-breaking scholar” by Tikkun magazine and “a new Jewish superhero,” by Jewcy magazine. Professor Shneer’s work concentrates on modern Jewish society and culture, especially Yiddish culture, Russian Jewish history, and Jews and sexuality. This series is being offered in conjunction with a CU Boulder course Professor Shneer is teaching this semester titled Lesbian and Gay History: Culture, Politics and Social Change in the United States.

On Saturday, December 1, in commemoration of World AIDS Day, the film series will feature the controversial 1989 film, “Tongues Untied” at 7:30 pm in the Atlas Building, Room 100, at the University of Colorado at Boulder.  Marlon Riggs, with assistance from other gay Black men, including poet Essex Hemphill, celebrates Black men loving Black men as a revolutionary act. The film intercuts footage of Hemphill reciting his poetry, Riggs telling the story of his growing up, scenes of men in social intercourse and dance, and various comic riffs, including a visit to the “Institute of Snap!thology,” where men take lessons in how to snap their fingers: the sling snap, the point snap, the diva snap. The film closes with obituaries for victims of AIDS and archival footage of the civil rights movement placed next to footage of Black men marching in a gay pride parade.  In conjunction with the commemoration of World AIDS Day, there will be an opportunity to support the work of Boulder County AIDS Project.

Elizabeth Fenn, Associate Professor and Driskell Chair in Western American History, will lead a post-screening discussion. Fenn holds a PhD from Yale University. Her field of study is the early American West, focusing on epidemic disease, Native American, and environmental history. Her interest in LGBT history arose many years ago when she first taught a course on the history of epidemic disease and took her class on a field trip to visit the NAMES Project, which was headquartered in Washington, D.C. at the time.

These events are free and open to the public but space is limited so RSVPs are required.  Please contact Meghan Zibby at Meghan.Zibby@colorado.edu or via phone at 303.492.7143 to RSVP. Additional information can be found at http://jewishstudies.colorado.edu.

Assistant Director of the Program in Jewish Studies at the University of Colorado at Boulder
Previous LOL at Hillel’s 2nd Annual Comedy Benefit
Next All In Until the End: Froma Fallik z”l