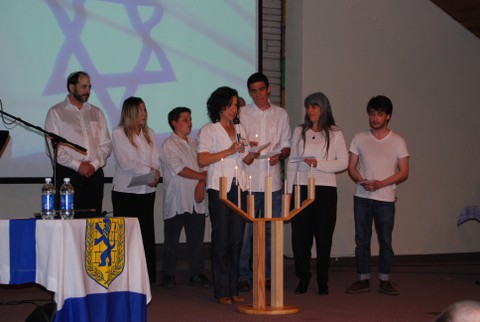 The event, a collaboration organized by Jewish Together -Boulder and including 18 Pomegranates, featured Israeli food, games and crafts for kids of all ages, a GaGa pit, all before a candle-lighting ceremony, singing and prayers, and finally a performance by Robbie Gringras.  The crowd featured many Israeli families, a lot of conversational Hebrew, and perhaps a record number of Boulder rabbis in one place at one time.

Here are more pictures of the event:

I've been writing things since grammar school, and served as a writer, photographer and/or an editor on my junior high and high school newspapers; the Daily Trojan at USC (where I earned my journalism degree); the student newspaper at the Anderson School at UCLA (where I earned my MBA); and written and edited countless business documents and presentations in the ensuing twenty years. I've been involved Jewishly since my bris and in Boulder since 1995. I'm married to my Executive Director Cheryl, and we have two children, Lauren and Ethan.
Previous Zilla Goodman to Speak at Congregation Bonai Shalom
Next Week in Review: April 27th, 2012