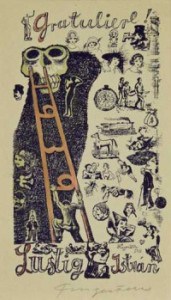 The Fourth Annual Week of Jewish Culture is happening now at CU. This exciting series of visual arts projects, films and guest lectures is dedicated to the exploration of more than 3500 years of Jewish culture including its current, most cutting-edge manifestations.

This year’s series is presented in conjunction with the community collaborative: Movers: Art and Conscience (www.jewishmovers.org) and examines visual culture with a focus on Italian Jewish culture.

As we have every year, CU’s Program in Jewish Studies is proud to be highlighting the most cutting edge forms of Jewish culture with an examination of Italian Jewish culture, an area not widely known or discussed,”

“”Memorializing the Persecution of Gay Men and Lesbians in Nazi Germany: Whom are we Remembering and Why Did It Take So Long?” with David Shneer, professor of History and director of the Program in Jewish Studies at CU Boulder
Colorado State University, Fort Collins campus
As part of its year-long theme on visual culture, Professor Shneer will be bringing images of memorials to the Nazi persecution of gay men and lesbians. In this talk, he will outline the history of gays and lesbians in Nazi Germany and beyond, and then focus on how this tragedy was memorialized.

Friday, March 2 @ 6 PM
“Through Soviet Jewish Eyes: Photography, War, and the Holocaust”
Congregation Har Shalom
725 West Drake Road Fort Collins, CO
David Shneer’s book, “Through Soviet Jewish Eyes: Photography, War and the Holocaust” examines the lives and works of two dozen Jewish photographers who were empowered by the Soviet state to photograph World War II and the Holocaust. Shneer examines how Jews came to be the “documentors of the revolution” and what they did when they were confronted with a war that targeted them as Soviets and as Jews. A slideshow of the internationally traveling photography exhibit that compliments the book will be available for viewing prior to the presentation. Copies of “Through Soviet Jewish Eyes” will be available for sale and signing by Professor Shneer.

David Shneer is professor of History and director of the Program in Jewish Studies at the University of Colorado Boulder. He holds a PhD from the University of California-Berkeley and has been called a “taboo-breaking scholar” by Tikkun magazine and “a new Jewish superhero,” by Jewcy magazine. Professor Shneer’s work concentrates on modern Jewish society and culture, especially Yiddish culture, Russian Jewish history, and Jews and sexuality. His books include “Queer Jews,” finalist for the Lambda Literary Award, “Yiddish and the Creation of Soviet Jewish Culture,” finalist for the National Jewish Book Award, and “New Jews: The End of the Jewish Diaspora.” “Through Soviet Jewish Eyes” was a finalist for the 2011 National Jewish Book Award.

Ginzburg Geography Display with visiting artist Jewlia Eisenberg followed by
“The Life and Work of Michel Fingesten ” with Davide Stimilli, associate professor of German, Comparative Literature and Humanities at CU Boulder
Black Box Theater in ATLAS on the CU campus
The Fingesten Collection is on view from Monday, February 27 through Friday, March 9 in the CU Art Museum lobby.

Jewlia Eisenberg will display and demonstrate the final results of the Ginzburg community mapping project which concludes with a dramatic art installation and presentation in the ATLAS Black Box Theater. This will be followed by a special lecture with CU professor, Davide Stimilli on the “Life and Work of Michel Fingesten.”

Michel Fingesten was born in 1883 in Buczkowitz, Silesia, and died in 1943 in Cerisano, Southern Italy, after the liberation by the allies of the camp in which he had been interned since 1940. Fingesten was one of the most productive and highly appreciated bookplate designers of the twentieth century, but the story of his tragic life still awaits to be told. His extraordinary work still lacks the wide public recognition that it deserves. The lecture will introduce this great artist and the collection that the CU Art Museum has recently purchased thanks to the generous support of donors to the Program for Jewish Studies.

Note: The 9 pm Charming Hostess Concert on Thursday, March 8 has been cancelled. Tickets are still available for the 7:30 pm concert.

Events will take place in venues on the CU-Boulder campus as well as the CSU Fort Collins campus. Complete details can be found at jewishstudies.colorado.edu. Many events have limited seating so RSVP’s are suggested. For additional questions, contact the Program in Jewish Studies at 303.492.7143 or via email at Jamie.Polliard@colorado.edu.

The Program in Jewish Studies at the University of Colorado at Boulder provides an interdisciplinary curriculum for students who wish to learn more about Jewish culture, history, society, and religion. Under the guidance of a distinguished faculty, the program offers a wide range of courses on the Jewish experience in the global arena. For more information, visit jewishstudies.colorado.edu.

Assistant Director of the Program in Jewish Studies at the University of Colorado at Boulder
Previous Party Like It’s Purim 2012!
Next So What’s a Food Challenge Anyway?