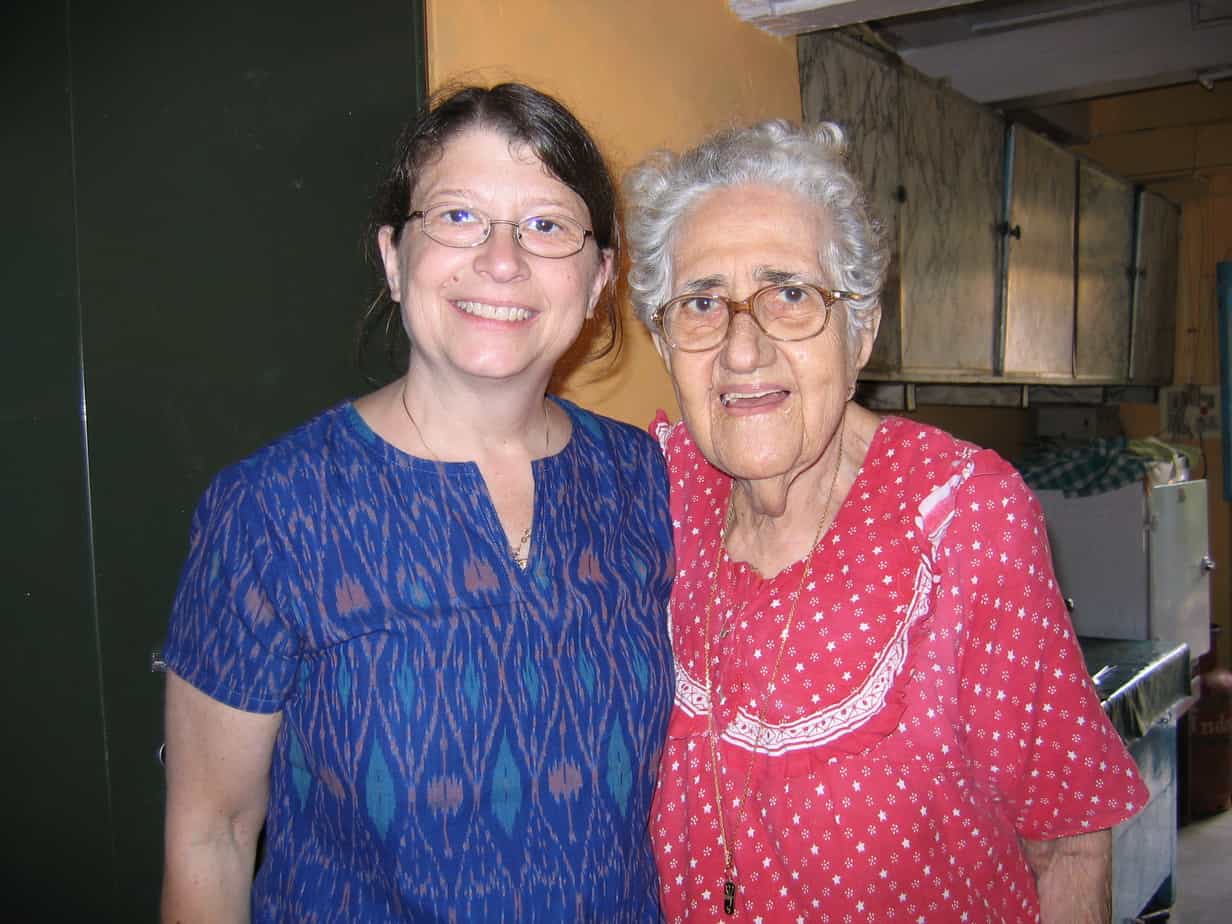 Visiting with Sarah Cohen, one of the few Jews remaining in Jew Town.

A Visit to Munnar and Cochin, India

While I was teaching at an international boarding school in Bangalore, I was able to explore different parts of India. During the Dussehra break (October), I traveled with two of my teaching colleagues- a middle aged woman from the UK and a younger woman from the Caribbean. Dussehra is an Indian festival that highlights the concept of good versus evil by marking the triumph of Lord Ram over the demon King Ravana. Most of the Indian faculty was planning to spend the time with family. The expats took advantage of their days off to travel throughout India.

The three of us flew to Cochin and hired a driver to take us to the mountainous region of Munnar. After spending a few days among the tea fields, we stopped in Cochin before returning to the airport.

In my memoir, May This Be the Best Year of Your Life, I make the following comments about our arrival in Munnar:

“The pitter-patter of raindrops decreased as we gained altitude. Had it not been for the occasional cows strolling down the roadway or the periodic piles of garbage, I could have imagined we were on another continent. Marissa candidly remarked that the rolling countryside reminded her of the Caribbean. Signs reminding people to pick up their litter were ubiquitous.

It was close to dinnertime when our vehicle made the steep climb up the rocky driveway to our accommodations,

which reminded me of an American bed-and-breakfast. As we climbed out of the car, our congenial hosts, Anil and Jeeva, greeted us. At the Royal Mist we had a bird’s-eye view of the surrounding peaks, which were partially covered by low-level clouds. The cool, unsullied air had me inhaling deeply and marveling at an outstanding example of God’s paintbrush. I was relaxed and calm.

Soon thereafter, our waiter delivered a simple, piping-hot Indian dinner with a meat entrée, a vegetable entrée, and chapatis. Our table sat on a wooden deck outside our bedroom doors. The dampness and chilly temperature caused Elizabeth and Marissa to bury themselves in layers of clothing topped off with heavyweight pashmina shawls. I reveled in the crispness of the evening air and managed comfortably with my hooded, black, waffle shirt embroidered with a University of Colorado logo.”

If you visit India, I recommend escaping to this area which is far removed from the hustle and bustle of the major cities. Then again, I prefer nature over concrete. Perhaps, others would favor city life over a rural existence.

On the last day of our excursion, we drove back to Cochin and walked the streets of Jew Town. The streets were filled with small shops that sold a variety of items. My friends spent a considerable amount of time bargaining. It was effective.

Our experiences were totally different from the impression presented in the recent movie, The Best Exotic Marigold Hotel. Unlike the episode when Judi Dench’s and Bill Nighy’s characters were unable to bargain with a merchant, my companions and I successfully bargained with several vendors. One of my past blogs compares and contrasts my experiences with the experiences of the fictional characters in The Best Exotic Marigold Hotel.

Years ago, I gawked at pictures of the handmade tiles that adorn the famous Paradesi Synagogue, a 16th century Cochin synagogue. I never imagined that one day I would walk on those unique Chinese tiles or gaze up at the colored glass lanterns.

In my memoir, I wrote:

“It was just like the picture in the calendar and online. This ancient synagogue had a centralized bimah, a second-floor women’s section, glistening blue-and-white floor tiles, and antique colored lights. Looking at all of this made me reflect on a lost community that relied on visitors to maintain its vitality.

If only the walls could retell the stories of this dying community. It reminded me of other notable synagogues—like the Caribbean-style synagogue in St. Thomas with the sand floor and the Choral Synagogue in St. Petersburg, Russia, with the KGB office across the street.

After we left the synagogue, a group of four goats, who strolled along with a couple of stray cats in tow, escorted us to the nearby cemetery, which was located down a side street. Like most old cemeteries, it was locked behind a rusted gate. We located the enclosed structure by the faded dedication sign that was written in Hebrew, English, and Hindi. It bore a date of 1898 for the erection of the tall compound wall and shed.”

Sadly, security concerns after the 2008 Mumbai attack prevent personal photos. I had to leave my camera with a nearby attendant. I can only share an interior picture that my son, Josh, took years ago and an exterior picture. (For more pictures see my photo gallery and blogs.)

This once vibrant Jewish community has dwindled to just a handful. At the time of my visit, it was the oldest active synagogue in the Commonwealth of Nations. Had I been traveling by myself or with Jews, I certainly would have tried to attend Shabbat services or connected with more people.

I was honored to meet Sarah Cohen, one of the few remaining Jews in Cochin. Her shop, Sarah’s Hand Embroidery, is located in the historical township of Jew Town. From what I was told, she was at that time the sole Jewish entrepreneur left in Jew Town. It is estimated that at one point the Jewish community was numbered at 25,000 people.

The Deccan Herald reported on Sunday, October 28, 2012, that with the death of 90 year –old Johnny Hallegua z”l the Paradesi Synagogue has only 8 members. Finding a minyan (quorum of 10) for his funeral in the nearby Jewish cemetery required reaching out to a couple of Israeli tourists.

My stop in Jew Town was brief. Nevertheless, I walked away with wonderful memories of a special place in Jewish history.

For additional information about Indian Jewry:

The Jews of Cochin:

The Last Jews of Kerala: The Two Thousand Year History of India’s Forgotten Jewish Community by Edna Fernandes. (Some have criticized this book for historical inaccuracies)

After I posted a shorter version of this article on my website, Bala Menon informed me of these additional Cochin resources.

Rachael Rukmini Israel, my daughter-in-law, wrote her book over a decade ago, for a youthful audience while she was attending a New Delhi high school.

Sandy Bornstein lived as an expat in India. Her award-winning memoir, May This Be the Best Year of Your Life, highlights what she learned as the only American teacher at an international Bangalore school. After living abroad, Sandy continues to explore the world and write about her travels. You can follow Sandy's adventures at www.sandrabornstein.com.
Previous Getting Ready for Hanukkah
Next Jewish Education – Career or Calling?