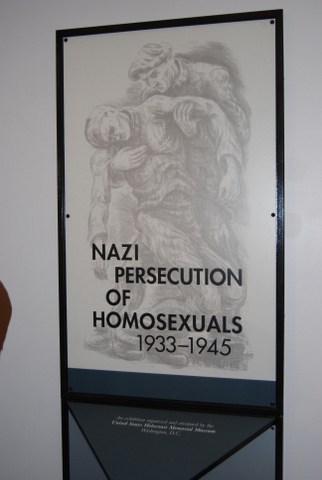 Thursday night, Out Boulder and other co-sponsors presented the Opening Reception for a traveling exhibition from the United States Holocaust Memorial Museum (USHMM) in Washington, DC titled “Nazi Persecution of Homosexuals 1933-1945” at the Boulder Public Library Auditorium and Art Gallery.

A broad coalition of community organizations have come together to bring “Nazi Persecution of Homosexuals 1933-1945” to Boulder. This exhibition will be on display April 21 through May 22 at the Boulder Public Library (1001 Arapahoe Avenue, Boulder, CO 80302).

Thousands of homosexuals perished at the hands of the Nazis in concentration camps along with six million Jews and other victims including, Roma (Gypsies), Poles, Soviet prisoners of war, Jehovah’s Witnesses, and people with disabilities during World War II and the Holocaust. The USHMM created this traveling exhibition to tell this important story in communities throughout the U.S.

Through reproductions of 250 historic photographs and documents, “Nazi Persecution of Homosexuals 1933-1945” examines the rationale, means, and impact of the Nazi regime’s attempt to eradicate homosexuality, which left thousands dead and shattered the lives of countless victims of the Nazi era. A living memorial to the Holocaust, the United States Holocaust Memorial Museum in Washington, DC inspires citizens and leaders worldwide to confront hatred, prevent genocide, and promote human dignity.

More pictures from the reception:

Several community events related to the exhibition will be held between April and May. Below is a calendar of community events associated with the presentation of the exhibition. These community events are using the exhibition as a backdrop for raising questions of social and political policy and urgency that have echoes with 1930s Nazi Germany. While these programs will not compare what happened in Nazi Germany to the contemporary American political landscape, we encourage you to attend these programs to memorialize the Nazi persecution of  homosexuals. Additional information on events can be found at www.outboulder.org

Tuesday, April 26 – Boulder ADAPT and Out Boulder Discussion of the Institutionalization, Isolation and Social Marginalization of People with Disabilities and the LGBTQ Community
Creek Room, Boulder Public Library 5:30 to 6:30pm
Today people with disabilities in the United States face forced institutionalization because of physical and mental disabilities. This social isolation and segregation is something we share with other marginalized Americans particularly those from the LGBTQ community. During this time of the US Holocaust Memorial Museum presentation of “The Nazi Persecution of Homosexuals;” Boulder ADAPT encourages you to join our dialogue about the imposed institutionalization and isolation that still impacts our lives today. We will remember the T-4 forced euthanasia of people with disabilities by Nazi persecution and how our public policy still prefers the Disability Community “out of sight.” ADAPT is a national grass-roots community that organizes disability rights activists to engage in nonviolent direct action, including civil disobedience, to assure the civil and human rights of people with disabilities to live in freedom.

Thursday, April 28 – Queer Jews Panel at CU
Boulder’s Center for Community, Room S350 6:30 to 8pm
What does it mean to be both Queer and Jewish? Please join us as several Queer Jews share their story. We will then open it up for audience questions and discussion.

Thursday, May 12 – Maria Krenz – Child Holocaust Survivor and author of “Made in Hungary: A Life Forged by History” will talk in the Boulder Creek Room, Boulder Public Library 6:30 to 8pm
“Made in Hungary” is a memoir of resilience. Born during a bombing raid in 1944, Maria Krenz’s childhood in Budapest traversed the tumultuous years from the Holocaust through the Soviet occupation to the year following the Hungarian Revolution, when she and her mother fled to Venezuela. She survived with her fierce spirit intact, and over time, grew hungry to understand the larger historical context of her early years. This book is the result, a poignant personal and family story imbued with history. Maria Krenz spent her first thirteen years in Budapest, and made her way to the United States in 1964. She worked as a writer/editor and administrator at the National Center for Atmospheric Research before her retirement. She lives in Boulder, Colorado.

Tuesday, May 17 – The Intersectionality of Reproductive Rights and LGBT Liberation
Boulder Creek Room, Boulder Public Library 6:30 to 8pm
In memory of those persecuted by the Nazis’ “Office for the Combating of Abortion and Homosexuality,” please join us as we begin the discussions regarding the connections between reproductive rights and LGBT liberation in contemporary America. Panelists will present comprehensive viewpoints connecting the two movements, and we will then open it up for questions and conversation. The panel includes Boulder Native Lorena Garcia, Executive Director of COLOR (Colorado Organization for Latina Opportunity and Reproductive Rights), Susan Levy, Executive Director of Boulder Valley Women’s Health Center; and Cathy Busha and Aicila Lewis, Co-Executive Directors of Out Boulder.

Wednesday, May 18 –  Screening of Ballot Measure 9 followed by discussion led by Dr. Glenda Russell and Donna Red Wing (invited) – Lafayette Public Library (775 West Baseline Road), 6 to 8pm.
In 1992, while Colorado was facing Amendment 2, Oregon was fighting Ballot Measure 9 – another virulently anti-gay initiative. 2012 marks the 20th anniversary of both of these measures. A revealing and spirited documentary, “Ballot Measure 9”takes a frightening look at a persistent and growing lack of tolerance in America. Utilizing dehumanizing tactics, efforts are made by the conservative Oregon Citizens’ Alliance to revoke “special rights” from homosexuals during the 1992 presidential election. Director Heather MacDonald creates a sense of urgency and tension while covering all sides of this issue. She includes segments of anti-gay films produced by the Alliance, as well as interviews with those who fought its passage. The film captures the emotional turmoil by outraged gays and lesbians as well as the outrageous claims of the religious right. If nothing else, this documentary provides irrefutable proof of the power of grassroots community organizing… (review adapted from Rochelle O’Gorman).

For more information on the exhibition, or to donate towards the cost of presenting this exhibition, please contact:

To view the online exhibit: www.ushmm.org/museum/exhibit/online/hsx/

This is the first time the exhibition will be displayed in Colorado. Thank you to the City of Boulder’s Human Relations Commission for their financial support toward the cost of bringing the exhibition.

They call me "NewsHound IV," because I'm a clever Finnegan, sniffing out stories all over the Boulder area. I love Jewish holidays because the food is GREAT, especially the brisket. Well all the food. I was a rescue pup and glad to be on the scent!
Previous J-Teen Chocolate Seder Saturday
Next Week in Review: April 22nd, 2011