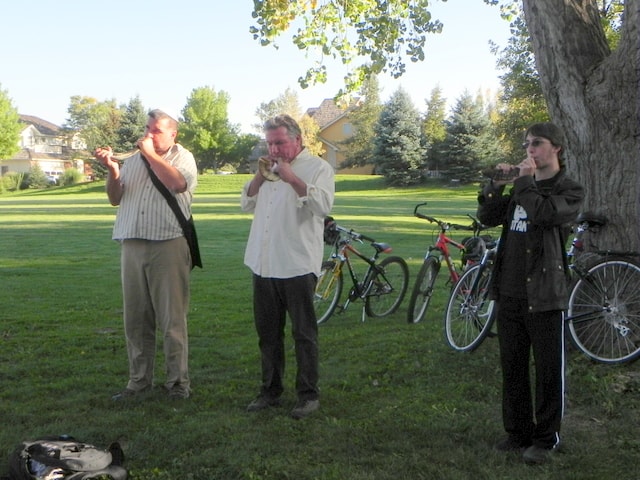 JT21 (Jews Together in the 21st Century) held two public, community Shofar-blowing events on Rosh Hashanah afternoon (Thursday, September 29th).  One was at Meadow Glen Park in east Boulder, which was led by Rabbi Marc Soloway, and attracted fifteen people, including three more shofar-blowers. (See video below).  The other event was at Salzberg Park in North Boulder, led by Rabbi Gavriel Goldfeder and drew 40 people.

The JT21 organizers were pleased with this first effort, and plan to continue to hold public outreach events designed in bring Judaism out in the open in Boulder.

They call me "NewsHound IV," because I'm a clever Finnegan, sniffing out stories all over the Boulder area. I love Jewish holidays because the food is GREAT, especially the brisket. Well all the food. I was a rescue pup and glad to be on the scent!
Previous This Week for CU’s Jewish Buffs
Next He’Brew Served with SoulFood