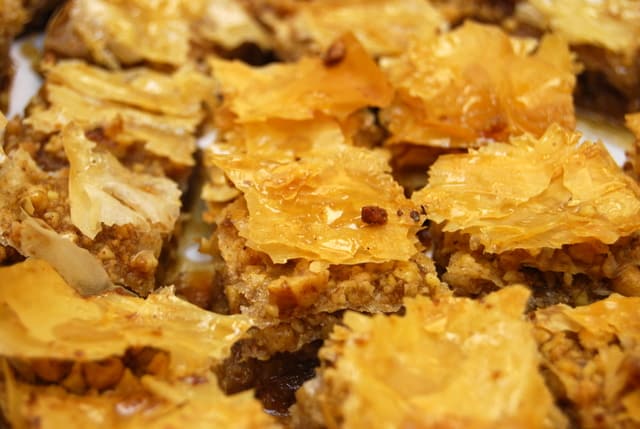 Opa! It Comes From the Greek…

Menorah held another in their successful series on Jews from around the world on Saturday night, this time taking 120 or so community members to Greece, via the Lower East Side of Manhattan.  The evening featured a documentary on the only remaining Romaniote Jewish synagogue left in the Western Hemisphere, on Broome St. in Manhattan, in what used to be a thriving Greek-Jewish island in the middle of a larger immigrant community.

Professor Carlos Zarur then elaborated on the historical information provided in the film, following by a question and answer period that uncovered a few Boulder community members with Romaniote roots.  This was followed by a delicious meal served, according to Menorah tradition, by Menorah Board members and consisting of spanikopita, Greek salad and a traditional Greek soup.

After a dessert of baklava, almond biscotti and Ouzo, guests were treated to a concert of Greek and Greek-inspired music by Sherefe, which inspired some dancing as well.

The Romaniote Greek Jewish community was established in Greece during the time of Alexander the Great,  flourished there for 1100 years, creating synagogues (a word with Greek roots) and rabbis to lead them in prayer away from the Temple Judaism of Judah and Israel at the time. Starting in 1492, many of these communities were overwhelmed by the fleeing Jews of Spain and Portugal after the Expulsion.  Over the next few hundred years, most Romaniote communities became absorbed into the larger and growing Sephardic communities, leaving relatively few Greek-speaking communities with traditions that dated back to before the Second Temple.  Many of these Greek Jews immigrated to America (and the Lower East side) during the many upsets in the Balkans between 1900 and 1925, the end of which saw the expulsion of long-established Greek communities from Turkey and Asia Minor during the breakup of the Ottoman Empire after the First World War.

As with most Manhattan Jewish neighborhoods, by the 1950’s the community started to disintegrate as the second and third generations moved away.  Broome St. synagogue managed to stay afloat, however, and survived partly by becoming a museum about Romaniote Judaism.  In the last ten years, however, the membership has begun to grow again as third and fourth generation Jews, interested in their heritage, started coming again.

Here are pictures and some video from the event:

I've been writing things since grammar school, and served as a writer, photographer and/or an editor on my junior high and high school newspapers; the Daily Trojan at USC (where I earned my journalism degree); the student newspaper at the Anderson School at UCLA (where I earned my MBA); and written and edited countless business documents and presentations in the ensuing twenty years. I've been involved Jewishly since my bris and in Boulder since 1995. I'm married to my Executive Director Cheryl, and we have two children, Lauren and Ethan.
Previous This Week for CU’s Jewish Buffs – 12/4
Next Colorado Gives Day; Won’t You?