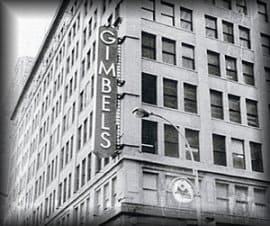 Q: What was Gimbels’ slogan?

The company, founded by a German Jewish immigrant, Adam Gimbel, opened a branch in New York City in 1910, which soon became the primary rival to the leading Herald Square retailer, Macy’s. This rivalry entered into the popular argot: “Would Macy’s tell Gimbels?” To distinguish itself from Herald Square neighbors, Gimbels’ advertising promised more: “Select, don’t settle.” Kathryn has spent her professional life writing about, teaching, and presenting the arts. Founding Director of the Boulder Jewish Film Festival, Kathryn was Director of Menorah and ACE at the Boulder JCC from 2003 through August, 2019. The former film and theater critic for the Boulder Daily Camera, Kathryn is the author of "The Fifty Greatest Jewish Movies" and "The Fifty Funniest Films of All Time." kathryn.bernheimer@gmail.com
Previous Week in Review: August 26th, 2011
Next Parashat Re’eh: Teen Dvar Torah