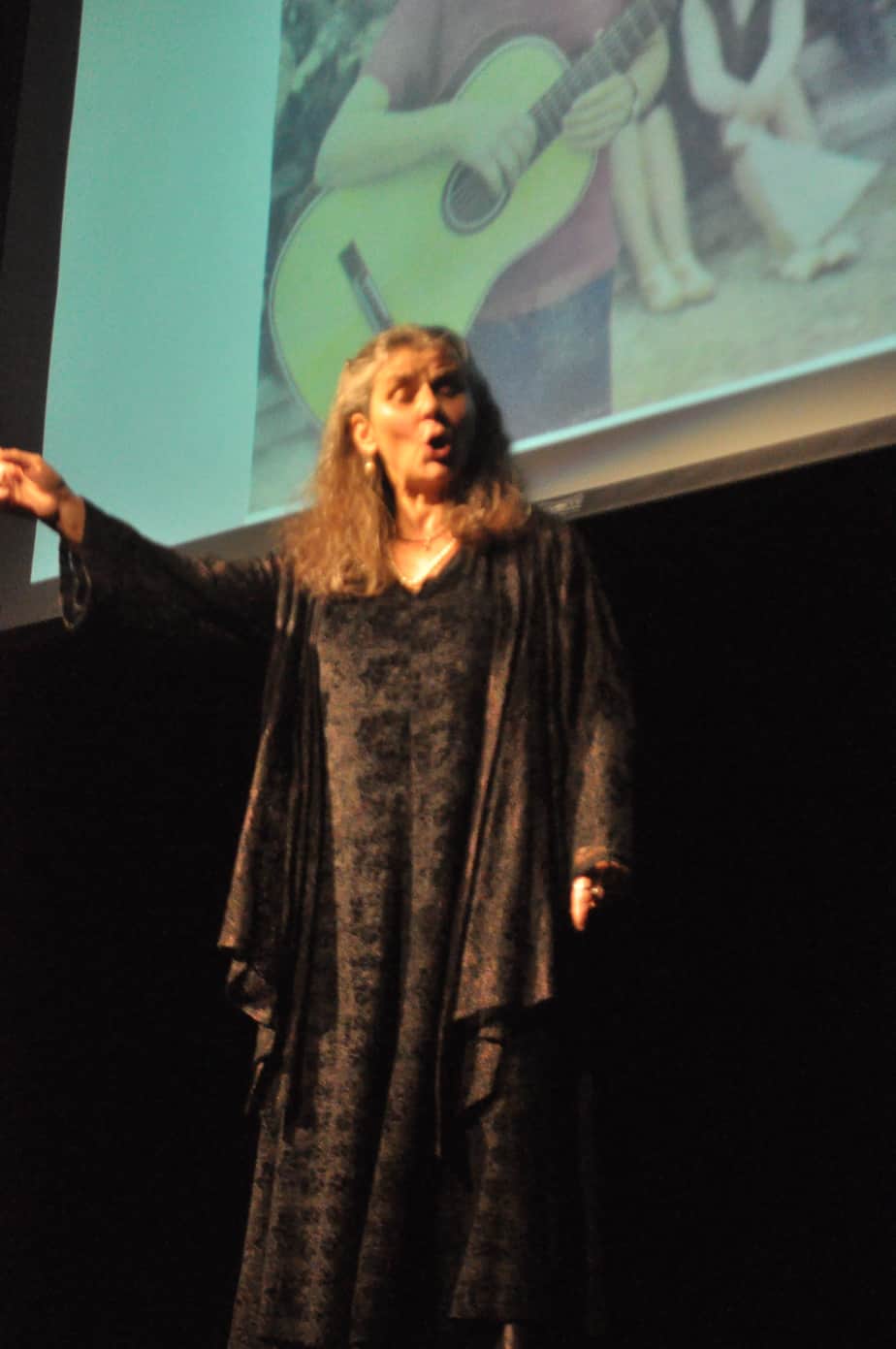 Boulder residents and students have a greater knowledge of East Berlin Jewry and the Iron Curtain after seeing Jalda Rebling perform and speak on Wednesday.

A Jewish Girl Sings Yiddish Behind the Iron Curtain: Jalda Rebling in Concert in Old Main Chapel on the CU-Boulder campus brought an intimate crowd. Jalda Rebling is one of two daughters of Holocaust survivor and Yiddish singer, Lin Jaldati. She has lived most of her life in East Berlin, behind what is often called the “iron curtain.” Like her mother, she is a Yiddish performer, and is also involved in Jewish Renewal.

Rebling spoke about the history of East Berlin as she performed Yiddish songs. She explained her family’s Holocaust history and said that her family went from the Netherlands to East Berlin to “build a new Germany.” Between each segment that was marked by a family picture, she sang a song. She often spoke of her mother.

“She was singing for many years, not only in East Berlin but around the world.”

Rebling talked about their years in Germany. She talked about her upbringing in the 1950s and 1960s. “Home was very different from the world outside,” she said. She grew up in a home where Yiddish was spoken. Outside of the house, she spoke German.

Although she became close with her mother, she described herself as a “bad” teenager, after showing a picture of herself with a cigarette. [Her mom] would say, “I only wish you a daughter like you,” she said. “I have sons.”

She spoke of the 1960s and going to high school. When she was wearing a Star of David, she received some snide remarks from a fellow student.  “You are wearing the sign of the imperialistic empire,” he said. She replied, “I’m wearing the sign of my grandparents who were murdered in Auschwitz.” She said that the boy fell silent after that retort.

She moved on to talk about the 1970s and her mother performing in Berlin. She spoke about her experience with theater and acting and how she went on to play Anne Frank and sing Yiddish songs with her mother. One performance lead to another and soon, Rebling and Jaldati performed all over the world.

“This started my journey to study Yiddishkeit in all directions,” she said. “And I will never stop this journey.”

She then spoke about movements to bring peace in East Berlin and their desire to bring a Yiddish Festival in East Berlin, which finally came about in the late 1980s. In 1988, Jaldati stopped singing. “When she was not able to sing anymore, it was clear she fulfilled her life,” Rebling said. After eventually leaving Germany, Rebling said that her path took her to Jewish Renewal and Boulder.

Jenya Kaufman, a senior at CU, said that he came thinking that he could relate to the Eastern European culture after seeing the title. “I really enjoyed it, but wish I could understand Yiddish,” Kaufman said.

Ilya Nudelman, a 21-year-old Spanish and finance major, came because he said that Yiddish is such a major part of Jewish culture and he is not familiar, though his grandparents talk about Yiddish and speak it. “I thought it was neat to see how one person and her family revived something that was dying.” Nudelman said. “And she’s still is helping keep this movement alive.” Sara Juliet Fruman is the first Boulder Jewish News intern and is also social media outreach editor for CUIndependent.com. She's originally from the suburbs of New York City, and she's a Yankee fan. She's a social media and new media enthusiast. Sara is a proud Zionist and Jew. She's obsessed with music, especially the Beatles. She's also interested in pop culture and comedy. In her free time, she likes to ski, read, write and relax with friends. Follow her on Twitter: @CUJewishBuffs, @cuindependent and @sarajuliet.
Previous Discovering the True Meaning of Family
Next Jewish Business Group In Westminster