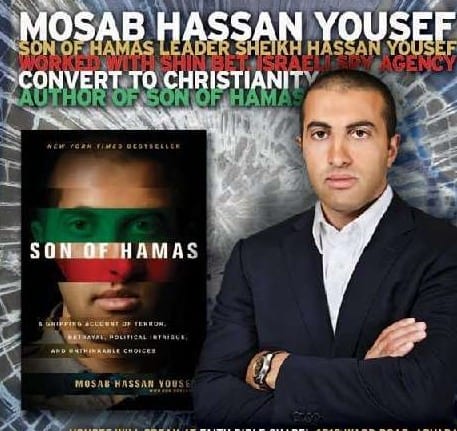 Come see and hear someone with extraordinary courage speak clearly about what living in a Sharia culture really means. Learn about this young man’s choice to affirm life, and oppose the hate, corruption and violence of Hamas.  Mosab Yousef, Hamas heir, is speaking in Denver Wednesday and Thursday evenings, about spying for Israel, and leaving his culture and family behind.

Mr. Yousef’s father, Sheik Hassan Yousef, was a founder of Hamas, and is a tribal leader. Mosab was raised to walk in his shoes. A scion for sure, but a scionist?

Mosab learned well the ways of Hamas, but after capture and imprisonment by the Israelis for terrorism, he contrasted their methods. He was sickened by the violence and corruption in his culture, and agreed to become an intelligence asset for the Mossad, stipulating that information he provided must be used to arrest the plotters, not kill them. This arrangement endured for ten years, saving many Arab and Jewish lives.

Hearing Mosab speak is an opportunity to understand the nature of the threat Western culture faces from the ideology of the Muslim Brotherhood, now in play for power in Egypt, and the Elders of the philosophy of Hamas, Iran, Hezbollah, Al Qaeda and more.

One for All and All for One