Want to know what all the fuss is about when it comes to glatt kosher and if it's worth paying for or not? Read this to get the scoop on folly versus fact.

There is a “glatt” frenzy going on in the kosher world, and it is time to take a close look at it.

If you look at the kosher chicken you just bought, you will probably find a “glatt” stamp on the packaging.  If you go to the kosher deli or the kosher section of the store, you will also probably find “glatt” stickers on tuna and egg salad sandwiches, fish and the like.  This is first evidence of the “glatt” frenzy.  Only red meat can be “glatt”.  Why?  Because the term “glatt” is a Yiddish word that means “smooth”, and it refers to the lungs of red meat animals. Only! There is no such thing as “glatt” kosher chicken, fish or salads that don’t contain red meat.

So why is “glatt” stated on packaging of non-red meat items?  It is to create the impression that there is a super kashrut, a kashrut that is better, holier than other kashrut.  It comes from the very mentality that results in one Jew not eating in the home of another Jew because their kashrut is not good enough.  If that’s your thing, fine.  If it’s not your thing, read on…

The lungs of every red meat animal, without exception, that is slaughtered for kosher consumption must be carefully checked for holes and adhesions.  If there are any holes at all, the animal is not kosher and the meat must be sold as non-kosher.

Sometimes bands of fibrous tissue are found on the lungs.  These are called “adhesions.”  The primary code of Jewish law, the Shulchan Aruch, presents one ruling for Sephardic Jews and another for Ashkenazic Jews regarding the acceptability of meat from animals whose lungs were found to have adhesions.  Rabbi Yoseph Karo z”l, compiler of the Shulchan Aruch, was a Sephardic rabbi, and his rulings are binding on Sephardic Jews.  He ruled that if the lung has any adhesions, the animal is not kosher.  This kind of “glatt” is more properly called “glatt Beit Yoseph.”  Rabbi Moshe Isserles z”l was an Ashkenazi rabbi who added glosses to the Shulchan Aruch that would be followed by Ashkenazic Jews.  He described a method of peeling and testing certain lower-class adhesions that would allow more animals to be declared kosher. This involves peeling the adhesions and blowing up the lungs to make sure that there is no hole in them.  The inflated lungs are submerged in water to see if bubbles emerge.  If there are bubbles, that is a sign that there is a hole, and the animal is not kosher.  If there were no more than two minor adhesions that could easily be peeled off, and there were no bubbles, then the animal is “glatt” for Ashkenazim.

Isserles’ ruling is legitimate and, assuming that the meat is otherwise properly slaughtered, inspected and prepared, it is 100% glatt kosher for Ashkenazim.  It should be noted that Isserles’s ruling is not applicable to young, tender animals such as lamb, kid, and calf.  All lamb chops, veal, or other meat from young animals must be “glatt Bet Yosef”, even for Ashkenazim to call it “glatt.”

Today, in the U.S., there is some confusion about the use of the term, “glatt.”  Here are two statements by major kosher certifiers about the meaning of “glatt.” The first is from Rabbi Ari Z. Zivotofski, Ph.D. at the Orthodox Union, from a web article entitled:  What’s the Truth About…Glatt Kosher:

For Ashkenazim, there is a tradition that a small, easily removable adhesion is defined as a lower class of adhesion, known as rir, and that the presence of up to two such small, easily removable adhesions still qualifies the animal as glatt according to Ashkenazic tradition. Eating glatt is a worthy stringency that avoids potential problems raised by the Ramah’s controversial leniency…

It should be emphasized that the Ramah’s ruling is certainly legitimate and, in theory, non-glatt meat, if inspected properly, is 100% kosher for Ashkenazim.” (emphasis added).

In this statement, the terms “glatt” [for Ashkenazim] and “non-glatt” are used interchangeably.

…However, at times the adhesion on the lung is not hiding a puncture.  This can be determined through careful, skillful removal of the adhesion.  Once removed, the adhesionless lung can be tested by blowing it up with air and submerging the lung under water.  If air bubbles appear in the water, it is an indication that the lung has been punctured and the animal is treif.  If the submerged lung is airtight, the animal is kosher, but not glatt kosher…

It can be reasonably stated that today’s kosher consumer is caught up in a glatt kosher frenzy, and meat purveyors, suppliers, and manufacturers are the first to capitalize on this growing phenomenon.  The problem is that there is a marked shortage of true glatt kosher meat; sometimes only one in twenty animals will be truly glatt kosher.  Some have extended the glatt standard to include animals whose lungs have small, easily removable adhesions; others have reduced the glatt standard even more. We must bear in mind that even if the meat is advertised as glatt, the kosher meat process does not end with the examination of the lungs.  There are many more steps that need to be taken before the meat reaches the homemaker’s kitchen.” (Emphasis added).

What we can take away from these two statements is that the term “glatt” may or may not refer to “glatt-Beit Yoseph,” and “non-glatt” refers to “glatt” for Ashkenazim.  But, there are other issues that are hidden in the meanings.

First, in many slaughterhouses, after the slaughter cut is made, but before the innards are removed, a hook is inserted to loosen the group of organs that houses the lungs.  By doing this, major adhesions would be removed that might otherwise be spotted on examination of the lungs in the carcass before removal.

Second, a real “biggie” for me, is that many slaughterhouses use post-slaughter stunning of the animals.  If the slaughterer does a sloppy cut, or if the animal is poorly positioned for the cut, blood may back up into the animal and pool in the meat.  This causes ugly meat that doesn’t sell very well.  Post-slaughter stunning obviates that problem.  It also allows for more rapid skinning and moving down the production line.

Third, there are varying levels of skill and attention that are paid to the remainder of steps in the production of kosher meat.

Finally, in most cases, the slaughterer makes one blessing before the slaughtering of all the animals and there are various levels of attention paid to checking the knife between the slaughter of each animal.

“Eco-glatt” is the term that EcoGlatt, Inc. uses to describe our slaughter methods and standards.

Under Jewish law, the slaughterer is allowed to assume that the animals were healthy at the time of slaughter unless there are broken bones or punctures that are visible, as listed in the Shulchan Aruch, which would disqualify them before slaughter even begins.  However, the Shulchan Aruch did not anticipate how sick animals might be as the result of modern feedlot conditions, transport conditions and veterinary interventions.  At EcoGlatt, we will only slaughter animals that are pastured, grass-fed and finished, and healthy.  We know our ranchers and we check our animals.

The terms “glatt” and “non-glatt” say nothing about how the animals were slaughtered.  “EcoGlatt” always means that the slaughter was done by the humane upright method.  Note here that even slaughterers who use the upright box may not be doing the most humane slaughter!  The way that animals are handled on their way to the box and while in the box greatly impact their stress levels. Studies have shown that the animals experience more stress in their management on the way to slaughter and their placement in the box than they do during the actual slaughter, unless the handlers know what they are doing. Special training is required to know how to use the box in the very most humane way.

At EcoGlatt, we are trained in animal handling so that the animals experience little to no stress in their processing. This is very important to us; Jewish law requires this of us even though it is not part of the laws that are customarily bundled together for kosher process certification.  We believe that the Torah requires us to choose the kindest, most humane way possible to do slaughter. If you have been buying any kosher meat that is from Uruguay, or certain meat from Israel or slaughterhouses in the United States, you have been buying meat that was slaughtered in an unconscionably cruel way – by shackle and hoist slaughter – the same method that was used in Postville that caused public outcry.  That meat is also full of stress hormones that are passed on to the one eating it.  Unfortunately, that meat is called “glatt” and is sold as holy.  Others have taken the positive step of purchasing the upright slaughter box, but often don’t know how to use it to minimize the animal’s stress.

During slaughter, our slaughterer does the blessing on each and every animal.  We also put down the knife and check it again after every cut.

We do an initial examination of the lungs in place in the animal before removing them and the other organs, intestines and stomachs for examination.  We will allow up to two small easily peeled adhesions, provided that the animal was otherwise healthy and the adhesions don’t indicate any questionable pathology.  That means that even if the lungs inflate properly and are watertight, if it looks like the adhesion indicates any disease process and covers what was at one time a perforation, or if it might deteriorate on its own to form a hole in the future, we will not accept the animal as kosher.

We are meticulous in our attention to porging (removal of forbidden vessels and fats), rinsing, salting and soaking, cutting and packaging of our meats.

Now you know the major issues between “glatt”, “non-glatt” and “ecoglatt.”  Of course, these issues are complex and there is a lot more to tell about them.  I invite you to go to the EcoGlatt website, www.ecoglatt.com, to follow the growing number of articles we share there to create a community of knowledgeable kosher meat consumers.

Chaplain Nalini Indorf Kaplan is cofounder of EcoGlatt Inc. Nalini lives in Boulder, CO, is studying to be a rabbi and shochet and serves as a chaplain at the University of Colorado Hospital in Aurora. She is also a member of Hazon and Farm Forward.
Previous Celebrate Purim this Spring Break
Next Purim with the Sharks at the Downtown Aqaurium 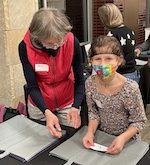