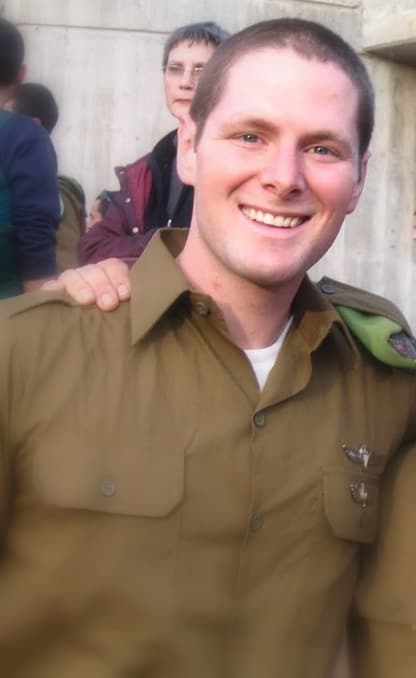 Ethics and the IDF: What Would You Do?

Kathryn Bernheimer December 4, 2011 Jewish Life Comments Off on Ethics and the IDF: What Would You Do? Nadav Weinberg shared his experience in the IDF with 75 people who attended his presentation at the new CU Chabad House on the Hill on November 30. Sponsored by Stand By Israel, the talk centered on ethics and the IDF, focusing on the special training all Israeli soldiers undergo and the challenging environment in which they are forced to operate.

Sergeant Weinberg was trained in the Orev special forces, an elite special forces unit of the IDF tasked with counter-terrorism in the West Bank. He now goes around the country giving interactive talks on college campuses, for high school students, and Jewish and Christian organizations about the high ethical standards of the IDF.

His insights into the IDF’s emphasis on ethical codes of conduct framed the conversation. But the heart of the evening was his role-playing with the audience. Using videos of combat situations, he asked the audience, almost half CU students, to make split-second decisions just as a real Israeli soldier would have to make in the moment.

In one video clip, an armed Palestinian combatant is fleeing during a deadly confrontation. You are a sharp-shooter and your commander has given you the command to shoot. As the Palestinian runs toward a crowd, the man grabs a young boy by his backpack, using him as a human shield as he flees. Do you take the shot? Why? Why not?

In these and other real-life scenarios, the point was not about determining what the right decision might be. Rather, Weinberg was demonstrating how difficult it is for the IDF soldier faced with ethical dilemmas to make these decisions. Weinberg asked the audience to raise their hand if they could identify an American soldier. All hands went up. An Israeli soldier? All hands go up again. A Palestinian soldier? No hands.

Since there is no Palestinian army, no uniform and no code of military conduct, Israel must abide by international law when engaging with their enemy. That means when a person takes up arms against you, he is a combatant. The minute he puts the weapon down, he’s a civilian.

How do you fight a war like that? It’s a rhetorical question Weinberg asked often. When a combatant uses children, women, clerics and even “peace activists” as human shields, how do you fight that enemy? When a mentally disabled Palestinian child attempts to cross a checkpoint with explosives strapped to his chest, what do you do to ensure you and your men’s own safety, as well as the safety of the Palestinian crowd within the potential radius of the blast, and save the child’s life?

There are no easy answers. Israel does its best. It trains its soldiers to prepare for all eventualities. Each debrief from every operation includes copious discussion of what went wrong, and of what might have gone wrong, so that the next operation is better.

Sergeant Weinberg is the first to admit that Israel is not perfect, and has made mistakes. But Israel faces an enemy sworn to its destruction that does not abide by the same code of ethics. By putting the audience in the shoes of the soldiers on the ground, Weinberg made his point. What would you do?

Kathryn has spent her professional life writing about, teaching, and presenting the arts. Founding Director of the Boulder Jewish Film Festival, Kathryn was Director of Menorah and ACE at the Boulder JCC from 2003 through August, 2019. The former film and theater critic for the Boulder Daily Camera, Kathryn is the author of "The Fifty Greatest Jewish Movies" and "The Fifty Funniest Films of All Time." kathryn.bernheimer@gmail.com
Previous Boulder’s Largest Chanukah Bazaar Going on Now
Next This Week for CU’s Jewish Buffs – 12/4