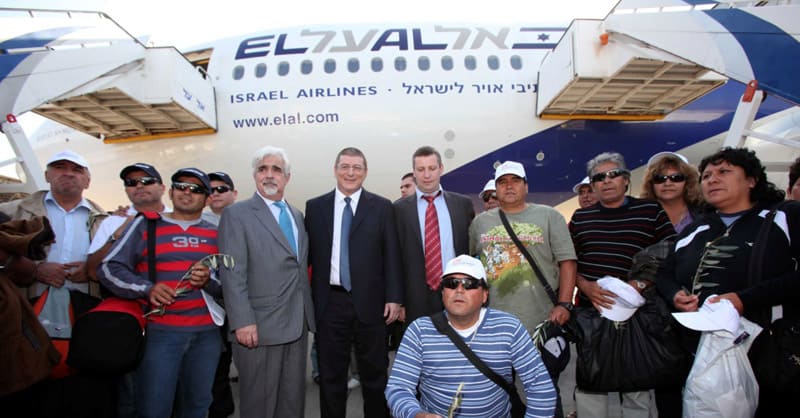 New York, NY – February 24, 2011 – EL AL Israel Airlines carried 31 Chilean miners on a nonstop flight from Sao Paulo, Brazil to Ben Gurion International Airport in Israel as special guests of the airline and the Israeli Ministry of Tourism. The miners captivated the world during the 69 days they were trapped underground and during a successful and miraculous rescue.

During the flight, the miners enjoyed a short film about their rescue that was specially produced for them by EL AL and Israel’s Channel 2 broadcast news station. The miners are touring Israel and visiting many of the country’s holy sites.

Celebrating more than 60 years of service, EL AL, Israel’s national airline, offers the most nonstop flights between New York (JFK/Newark) and Israel as well as the only nonstop service from Los Angeles.  Worldwide, EL AL flies to more than 40 destinations from Israel and serves dozens of other destinations throughout the world (including the USA) via partnerships with many other leading carriers. Only EL AL has first class service on nonstop flights between the U.S.A. and Israel. The airline has annual revenues of about $2 billion and carries 3.6 million passengers every year.

They call me "NewsHound IV," because I'm a clever Finnegan, sniffing out stories all over the Boulder area. I love Jewish holidays because the food is GREAT, especially the brisket. Well all the food. I was a rescue pup and glad to be on the scent!
Previous Holocaust Survivors Come to CU
Next A Sex Farce Steeped in Suffering