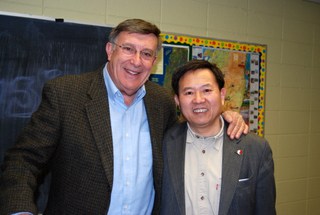 China IS Fascinated By the Jews

David Fellows January 6, 2011 Arts & Culture Comments Off on China IS Fascinated By the Jews

Professor Xu Xin captivated a full house at the Boulder JCC Thursday night, explaining just why the Chinese have been fascinated by the Jews for at least 150 years, and why he himself has been interested since 1977.

Explaining his personal journey, Xu began teaching American Literature at Nanjing University in late 1976.  China was emerging then from a 25-year closure to world cultures by Mao and the Chinese Communist Party.  Xu, deciding what part of American Literature to focus on, heard the news that Saul Bellow had been awarded the Nobel Prize in Literature for 1976.  Xu read Bellow’s works, and thus began a ten-year love affair with the likes of Bellow, Philip Roth, I.B. Singer, Clifford Odetts and Joseph Heller.

Xu had been teaching Jewish-American Literature of the 20th Century for almost ten years before he met his first Jew: Jim Friend, an American professor who arrived at Nanjing University in 1985 to teach English.  They struck up a friendship, and when Xu took up a post at Chicago State University, he lived with the Friends for a year.  His first weekend in America, the Friends brought him to Milwaukee for their nephew’s Bar Mitzvah — and Xu, a former Red Guard during the Cultural Revolution, attended his very first religious service of any kind.

We had been told that religion was the opiate of the masses.  If this was the opium, I wanted more!”

After being immersed in Jewish culture during his two years in Chicago with the Friends, Xu decided to expand his studies beyond American Jewish Literature to the whole of Jewish culture and history.  On his way back to China, he visited Israel.  The only things he learned about Israel while in China had been that “Israel was the running dog of the American Imperialists” and that Hebrew was a dead language.  He learned quite differently while there.  He has since studied Talmud at Hebrew University, spent time on kibbutzim, and spent three months in Hebrew Ulpan, learning the “dead” language.  He has added modern Hebrew literature to his courses, even translating a sampling of Hebrew short stories into Chinese.

Most importantly, Xu has practically single-handedly raised the profile, interest and desirability of Judaic Studies in a country that has had a fascination with Jews off and on since before the Kaifeng Jewish community was established in the 11th century.  (For a brief history of Jewish presence in China, see our earlier article on Prof. Xu.)  There are now Judaic Studies departments at many Chinese universities, many of their faculty members former students of Xu.

So, in the end, why are the Chinese fascinated by the Jews?  Xu gave these insights:  Like the Chinese, the Jews are an ancient people and culture that has survived many attempts at destruction and assimilation.  At the same time, Jews have struggled with the transition from ancient tradition to modernity, as the Chinese have.  Further, there are cultural similarities:  a central respect for the values of tradition, families, ancestors and education; plus a fundamental tolerance for other religions and cultures (a reason that anti-semitism is virtually unknown in China).  Finally, the Chinese are attracted by Jews’ economic success, which they witnessed first hand through the Kaifeng community, and then in Shanghai and the other concession cities in the 19th and early 20th centuries; and the Jews’ never ending work toward re-constituting their homeland and gaining political independence.

Here are more pictures from the evening:

I've been writing things since grammar school, and served as a writer, photographer and/or an editor on my junior high and high school newspapers; the Daily Trojan at USC (where I earned my journalism degree); the student newspaper at the Anderson School at UCLA (where I earned my MBA); and written and edited countless business documents and presentations in the ensuing twenty years. I've been involved Jewishly since my bris and in Boulder since 1995. I'm married to my Executive Director Cheryl, and we have two children, Lauren and Ethan.
Previous New Israel-Based Fellowship Available
Next Week in Review: January 7th, 2011 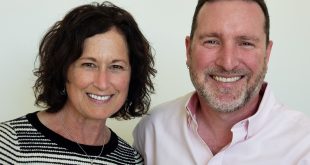