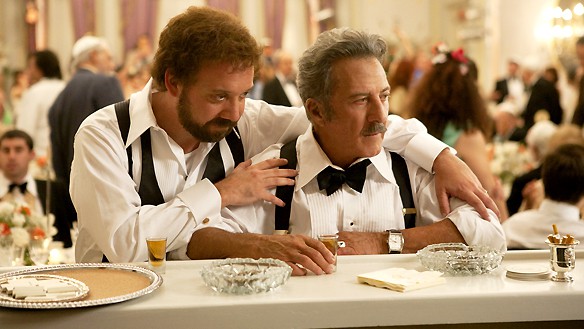 Barney, a Screen Version of the Shlemiel

Kathryn Bernheimer February 23, 2011 Arts & Culture Comments Off on Barney, a Screen Version of the Shlemiel “The Apprenticeship of Duddy Kravitz,” the 1971 story of a Jewish hustler played by a very young Richard Dreyfuss and based on a 1959 novel by Canadian author Mordechai Richler, remains a milestone in Jewish film. I ranked it number 17 in “The Fifty Greatest Jewish Movies.”

Naturally, I therefore eagerly awaited the local theatrical release of “Barney’s Version,” based on Richler’s 1997 final novel, which garnered Paul Giamatti a Golden Globe for best actor in a comedy or musical. (Critics have rightly wondered if this rather sad film about a pathetic shlemiel is indeed a comedy at all.)

“Barney’s Version” is now playing in Louisville and will no doubt open in Boulder soon. It may not be a comedy, despite some darkly humorous moments, but it is a richly complex character study that is well worth seeing.

Like “Duddy,” and like “Joshua Then and Now” (the 1985 film adaption of Richler’s semi-autobiographical novel starring James Woods), “Barney’s Version” focuses on a less than exemplary human being struggling not to make a complete mess of his life. Like Duddy and Joshua, Barney is crass, abrasive, pushy. And like his fellow self-sabotaging anti-heroes, he is strangely sympathetic. Jewish audiences will no doubt understand his underlying sense of alienation and inferiority. The film is explicit in its Jewish references, and echoes Richler’s concerns about the uneasy place held by Jews in Canada.

Richler likes to depict his character warts and all, and Barney has plenty. He drinks way too much. He chain smokes cigars. He is uncouth, stubborn, irritable and proud. He’s such an incorrigible shmuck he falls for and pursues his dream girl at his own wedding to the perfectly awful but awfully rich JCP (Jewish Canadian Princess) played by Minnie Driver. It’s all part of his charm.

What exactly is this said charm? It has something to do with his honesty, his naked neediness, his refusal to care what anyone thinks of him. His undying devotion to a woman who loves him in spite of his flaws is a redeeming quality.

Dustin Hoffman does a delicious turn as Barney’s working class dad, a former cop sorely lacking in social graces but who proves to be a mensch. Jake Hoffman, a spitting image of his dad, plays Barney’s son.

Giamatti, reprising the besotted shlub persona he played so appealingly in “Sideways,” is pitch perfect as a man who is his own worst enemy – and who knows it. The film follows Barney’s lifetime of misadventures. In another actor’s hands, this irascible character might be merely annoying. Somehow, Giamatti turns these qualities into virtues, and creates for the audience the somewhat uncomfortable but compelling experience of watching a real life unfold.

Kathryn has spent her professional life writing about, teaching, and presenting the arts. Founding Director of the Boulder Jewish Film Festival, Kathryn was Director of Menorah and ACE at the Boulder JCC from 2003 through August, 2019. The former film and theater critic for the Boulder Daily Camera, Kathryn is the author of "The Fifty Greatest Jewish Movies" and "The Fifty Funniest Films of All Time." kathryn.bernheimer@gmail.com
Previous 4 Questions for @VRPartner’s Michael Joseph
Next Purim Carnival Fun