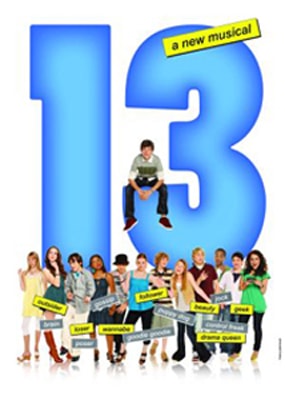 Teens Raise the Roof in “13 the Musical” Boulder, Colo. – Sept. 21, 2010 – Twenty-five of Colorado’s most talented teenagers will light up three metro area theaters as “13 the Musical” bursts onto the stage for the Rocky Mountain regional premiere in late October and early November. The show opens in Denver on Friday, October 22.

Tony Award-winning composer Jason Robert Brown’s inspired rock and roll score and laugh-out-loud lyrics provide the fuel for two handpicked casts of Front Range middle and high school performers to tell the coming of age story of soon to be 13-year-old Evan Goldman, who is uprooted from a magical childhood in Manhattan to land in “the lamest place in the world”—Appleton, Indiana. The story navigates through the halls of Dan Quayle Junior High, where the displaced New Yorker tries every trick in the book to win favor with the school in-crowd so they’ll come to his Bar Mitzvah. In doing so, he is confronted with boneheaded football players, gossiping cheerleaders, fights over hot chicks, and Lucy, the undisputed queen of the school.

With songs like “The Lamest Place in the World,” “Becoming a Man,” “(That Girl is) Bad, Bad News,” and “What It Means to be a Friend,” the production is driven by crisp, original rock numbers, get-up-and-dance R&B, and soulful ballads that explore the gamut of adolescent emotions.

“13 the Musical” opens in Denver on Friday, October 22 and plays through opening weekend at the Crossroads Theatre in the newly revitalized 5-Points area of Denver, followed by three performances at the Broomfield Auditorium on Saturday October 30 and Sunday October 31. The show finishes its Colorado run in Boulder with nine performances at the 1,000-seat Boulder High School Auditorium November 5-7 and 12-14.

“This production is a fantastic opportunity for Front Range audiences to see a smart, contemporary Broadway musical performed by very talented young performers, some of whom could very likely go on to the national stage,”

Tickets for all performances of “13 the Musical” are available on line at www.parlando.org. A portion of each ticket sale will be donated to There With Care, a Colorado-based philanthropic organization that is committed to supporting families with critically ill children.

About Parlando School for the Arts

With more than 700 students and 50 of the region’s most accomplished music teachers, Parlando School for the Arts offers classes and private lessons in each of four studios — Piano and Keyboard, Instrumental, Early Childhood, and Voice and Theater through Parlando’s Broadway in Boulder Studios. Since 2008, Parlando has provided more than $100,000 in tuition assistance and fee waivers for talented student musicians, as well as 200 days of supplemental music education in the Boulder Valley School District. Parlando strives to be Colorado’s premier music school, where students of all ages, abilities and backgrounds come together to share the language of music and the arts. For further information about Parlando School for the Arts, please visit www.parlando.org.

They call me "NewsHound IV," because I'm a clever Finnegan, sniffing out stories all over the Boulder area. I love Jewish holidays because the food is GREAT, especially the brisket. Well all the food. I was a rescue pup and glad to be on the scent!
Previous Physicians Give Thumbs Up: Medicine & Morals Course
Next 2010 Festival of Books and Culture

Ever wonder how Israelis perceive American Jews? "The New Jew" is a four-episode TV documentary series that showcases the cultural and political influence of the American Jewish community, alternative models for living a rich Jewish life, and the rifts in relations between Jewish Americans and Israel.