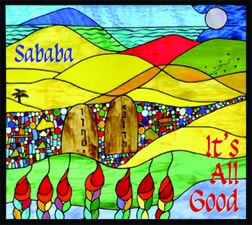 Sababa, a Denver group consisting of  Steve Brodsky, Robbi Sherwin, and Scott Leader that played the Main Stage at the 2009 Boulder Jewish Festival,  is holding a fun family concert celebrating the release of their new CD “It’s All Good.”  The concert will be held on Sunday, April 25, 2010 at 4:00 pm at the Shadow Theatre, 1468 Dayton Street, Aurora, CO (just south of Colfax).

General Admission tickets for this family concert are just $5.00 in advance (such a deal!).  Tickets are available for purchase now ONLY at http://www.stevebrodsky.com.

Tickets will be $7.00 at the door, if seats are still available (but they expect to sell out – so advance purchase is highly recommended!).  Seating is GENERAL ADMISSION, so arrive early for the best seats (don’t worry, it’s not that big a theatre, there are no “bad” seats!).  Doors will open at 3:30 pm on the day of the show. A portion of the proceeds from this concert will benefit the “Make It A Bridge” Fund of the Union for Reform Judaism, supporting scholarships for young songleaders in memory of their good friend, Steve Meltzer, z”l.

For a preview of the new music (sound clips, lyrics, photos, and more), visit the band at www.SababaMusic.com.

They call me "NewsHound IV," because I'm a clever Finnegan, sniffing out stories all over the Boulder area. I love Jewish holidays because the food is GREAT, especially the brisket. Well all the food. I was a rescue pup and glad to be on the scent!
Previous Daniel Bennett Named Interim Head of School at BJDS
Next BJDS’ Annual Event on May 2