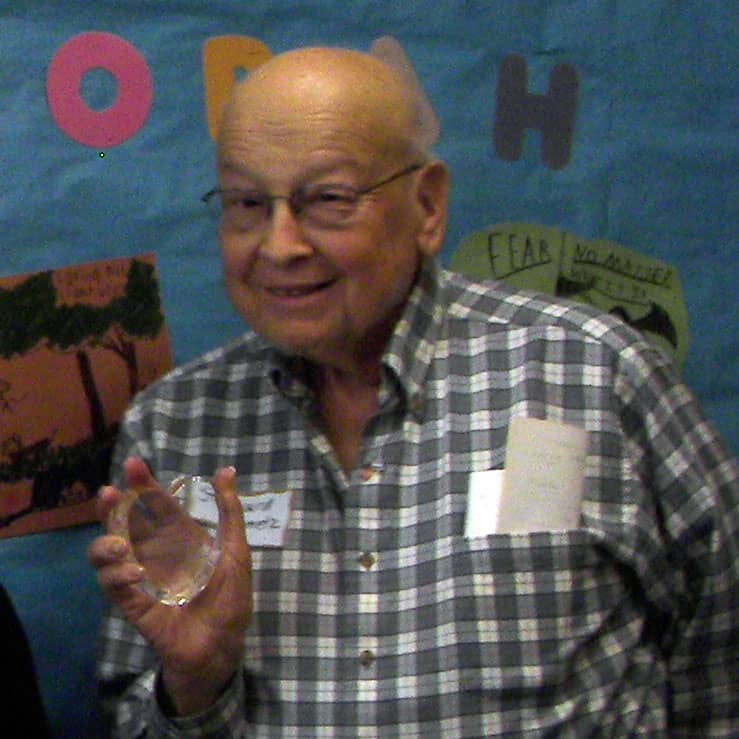 Boulder resident Howard Steinmetz was presented with the inaugural “Spirit of JGSCO” award at the annual meeting of the Jewish Genealogical Society of Colorado (JGSCO) on Sunday June 13, 2010.

Presented with a clear glass award in the shape of a heart, Howard embodies the best characteristics of a Jewish genealogist and that of an organization run 100% by volunteers.

As JGSCO Awards Committee Chair, Terry Lasky, announced at the ceremony, “Howard Steinmetz was recognized for his spirit as it positively influences others. His contributions, in this way, are something special that can’t be quantified – but are truly felt.”

Committed to and passionate about doing his own family history, Howard’s spirit is infectious. He is always willing to listen, offer advice to beginners or to participate in sharing resources with more advanced researchers. Howard’s attitude hasn’t ceased, even during very trying times. This spirit has been so strong that it has gone well beyond his personal genealogical quests and made a special and positive effect on other JGSCO members.

An active member of the local JGSCO since 2005, Howard’s pursuit to continue learning about his family history has been a constant and steady endeavor. In addition to being a regular face at Boulder and Denver genealogy lectures and workshops, he has attended annual conferences on Jewish genealogy in other cities and is one of the leaders of the Rohatyn Shtetl Research Group along with landsman he has met online through JewishGen.org; Howard’s involvement has been extensive and a connection he cherishes.

One-time “Pillar of the Society” awards were also presented during the annual meeting to founding members Sandra Greenberg, Miriam Ohr, Myndel Cohen, Anne Fendrich and RitaJo Tensly, all of Denver.

Founded in 1995 and part of a network of 70 societies worldwide, the Jewish Genealogical Society of Colorado is a leader in education, research, information exchange forums and resources for Jewish genealogy. The Society is nonprofit and run 100% by volunteers. Providing members with the opportunity to be associated with those who share a common interest in Jewish genealogy, meetings are a forum to exchange information, to share resources and experiences and to learn new techniques for research. Expertise and topical areas of interest span the globe and spectrum of Jewish history, including Colorado-based family history, but also for roots around the world in Israel, Europe, South America, South Africa, Canada and elsewhere. Membership in the Society is $30 per single and $40 per household annually. Information or to join online at www.jgsco.org.