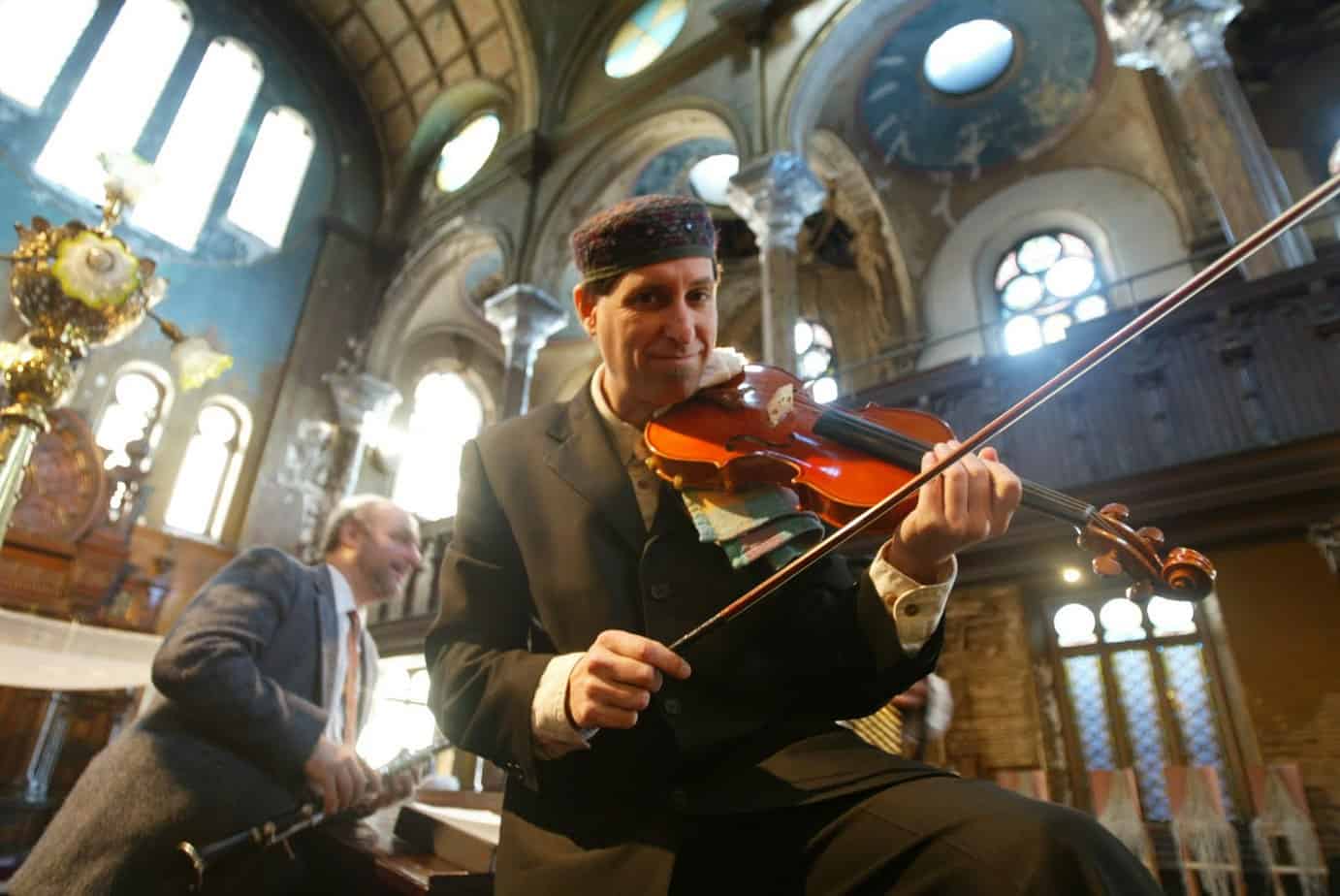 Hear the King of Klezmer at the JCC Local audiences may remember Yale Strom, who composed original music for the Denver Center’s 1996 production of Tony Kushner’s “The Dybbuk.” But klezmer aficionados around the world know him as a violinist, composer, filmmaker, writer, photographer, playwright – and the world’s leading ethnographer-artist of klezmer music and history.

On Saturday, November 13, Boulder audiences will have the opportunity to hear Strom in person, at “Crazy for Klezmer,” an evening built around Strom, with a concert by Sheldon Sands and the Boulder Klezmer Consort, featuring soloist Faye Nepon. Tickets to the 7 pm event at the Boulder JCC are $36 and include an “old world” buffet and libations.

Strom is a pioneer among klezmer revivalists in conducting extensive field research in Central and Eastern Europe and the Balkans among the Jewish and Rom communities since 1981. Yale Strom’s klezmer field research helped form the base for the repertoires of his two klezmer bands, Hot Pstromi in New York and Klazzj in San Diego. Since Yale’s first band began in 1981, he has been composing his own New Jewish music, which combines klezmer with Hasidic nigunim, Rom, jazz, classical, Balkan and Sephardic motifs. He also composed all the New Jewish music for the National Public Radio series “Fiddlers, Philosophers & Fools: Jewish Short Stories From the Old World to the New,” hosted by Leonard Nimoy, as well as numerous film scores.

Strom is also one of the only top composers of Jewish music to carry on the tradition of writing original songs, with Yiddish lyrics, about humanitarian and social issues. His 12 CDs run the gamut of traditional klezmer to “new” Jewish music. Strom has performed with many well-known musicians, including Andy Statman. He was the first klezmer violinist in history to be invited to instruct master classes at both the American String Teachers Association and the Mark O’Connor Fiddle Camp.

Yale has been hailed as “a commanding bandleader and composer” (Pulse! Magazine), “one of the best klezmer musicians in the country” (Houston Public News), and “an all-around musical visionary” (Seth Rogovoy). Dirty Linen sums it up most concisely: “Yale Strom is a Jewish roots trip unto himself.”

Strom’s research has also resulted in nine books, including “The Last Jews of Eastern Europe,” “Uncertain Roads: Searching for the Gypsies,” and “The Book of Klezmer: The History, The Music, The Folklore,” a 400-page history with original photos and sheet music gathered during his 60 ethnographic trips to Central and Eastern Europe. At the Boulder JCC he will speak about his new book, “Dave Tarras – The King of Klezmer.”

Strom’s solo photo exhibit, “The Rom of Ridgewood,” about Gypsy communities in Queens, New York, was mounted at the Queens Museum of Art. His photos are part of many collections including Beth Hatefusoth, the Skirball Museum, the Jewish Museum of NYC, the Frankfurt Jewish Museum and the Museum of Photographic Arts.

Strom has lectured extensively throughout the United States and Europe and taught at NYU for 4 years, where he created the course “Artist-Ethnographer Expeditions.” He is on the advisory board of the Center for Jewish Creativity, based in Los Angeles and is Artist-in-Residence in the Jewish Studies Program at San Diego State University. Strom was the guest curator for the Eldridge Street Project’s A Great Day on Eldridge Street—a musical and photographic celebration of the newly restored Eldridge Street Synagogue that took place in 2007.

To purchase tickets to “Crazy about Klezmer,” contact Kathryn at 303-998-1021, kathryn@boulderjcc, or visit www.boulderjcc.org.

Kathryn has spent her professional life writing about, teaching, and presenting the arts. Founding Director of the Boulder Jewish Film Festival, Kathryn was Director of Menorah and ACE at the Boulder JCC from 2003 through August, 2019. The former film and theater critic for the Boulder Daily Camera, Kathryn is the author of "The Fifty Greatest Jewish Movies" and "The Fifty Funniest Films of All Time." kathryn.bernheimer@gmail.com
Previous Five Star Kosher?
Next Jewish-American Literature Collection Donated to CU