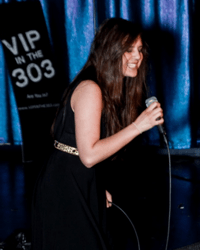 A Jewish Up and Coming Singing Star in Boulder

Jessica Hayoun would like to thank all of the supporters that were able to come down last Sunday night at Lannie’s Clocktower Cabaret for Denver’s Next Nightclub Star competition. There was a great turnout and Jessica was awarded second place. She will perform at Lannie’s headlining her own show (date to be set later) and was also asked to perform in September at the “Halfway to St. Patty’s Day Parade and Festival” in Downtown Denver in front of a crowd estimated at 200,000 people.

Mazel tov to Jessica and her family, Sylvain, Pamela, David and Daniel.  For details about the contest, see our prior article.