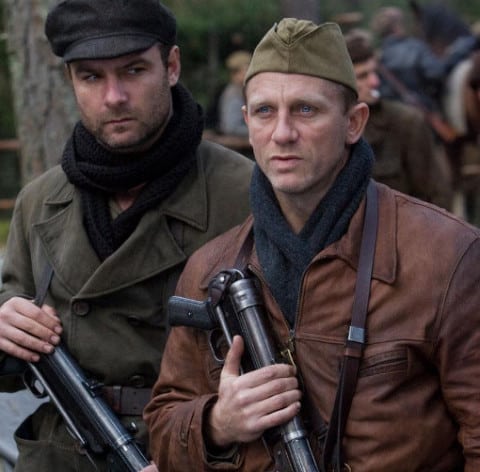 In anticipation of Yom HaShoah, Menorah presents two screenings of “Defiance,”  directed by Edward Zwick  and starring Daniel Craig and Liev Schreiber. The true story of the Bielsky Brothers honors the partisans who took refuge in the forests where they fought the Nazis and provided shelter for Jews.

Based on the book by Nechma Tec, “Defiance” pays tribute to Jewish resistence, so often neglected in Holocaust films. The stirring film asks if it is possible to keep faith alive in a time when the world seems devoid of humanity and survival becomes a way of life.

The courage at the center of ‘Defiance‘ has to do not only with the truth of the movie’s story, but also with how director Ed Zwick tells this tale of World War II heroism in as straightforward, old-fashioned a way as possible. Zwick (‘Glory,’ ‘Blood Diamond‘) lets more strategy and action into the movie than syrupy emotion (it doesn’t seem at all crazy that the partisans could take on a tank). Plus, you have to admire a film that, in a season full of Nazi flicks, is the only one to open with actual newsreel footage of Hitler. ‘Defiance‘ isn’t afraid to stand apart.” –  New York Daily News

Both screenings are at the Boulder JCC, 3800 Kalmia, Boulder.

Kathryn has spent her professional life writing about, teaching, and presenting the arts. Founding Director of the Boulder Jewish Film Festival, Kathryn was Director of Menorah and ACE at the Boulder JCC from 2003 through August, 2019. The former film and theater critic for the Boulder Daily Camera, Kathryn is the author of "The Fifty Greatest Jewish Movies" and "The Fifty Funniest Films of All Time." kathryn.bernheimer@gmail.com
Previous Shabbat Mishpacha This Saturday
Next Boulder Jewish Gardens – Get Ready to Plant